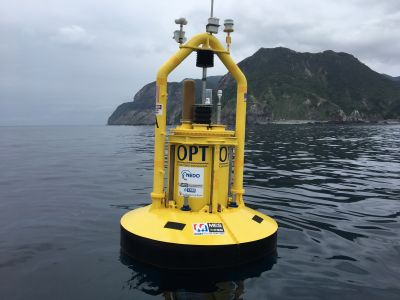 The combined value of the contracts exceeds US$1.9 million and includes the sale of a PB3 PowerBuoy and the development and supply of a state-of-the-art, turn-key integrated Open Sea Lab that will be OPT’s first deployment off the coast of Chile.

The first contract with Enel Green Power Chile Limitada S.A., a subsidiary of Enel Chile, provides for the supply of a PB3 PowerBuoy along with associated mooring system, and will provide turn-key system deployment off the coast of Las Cruces, Chile as an autonomous offshore platform powering a suite of oceanographic sensors and transmitting real-time data back to land. The scope of the agreement is in support of the Marine Energy Research and Innovation Center (MERIC) Project, an initiative that aims to diversify Chile’s energetic matrix and to convert Chile into a world reference in the development of marine renewable energies.

The second contract with Enel Green Power Chile Limitada S.A., a subsidiary of Enel Chile, calls for OPT to develop and supply a state-of-the-art, turn-key integrated Open Sea Lab (OSL). The OSL encompasses a sensor suite to be powered by the PB3 PowerBuoy, as well as an integrated shore-based wave radar system. The sensor suite will comprise an Acoustic Doppler Current Profiler (ADCP), a device which is used to measure water current velocities over a depth range, water sensors, and mooring load sensors. The design and buildout of the OSL will be spearheaded by OPT’s Innovation and Support Services vertical. Deployment of the OSL is expected within the first half of 2020.

The PB3 PowerBuoy integrates patented technologies in hydrodynamics, electronics, energy conversion, and computer control systems to extract the natural energy in ocean waves. The result is a leading edge, ocean-tested, proprietary autonomous system that turns wave power into reliable, clean, and environmentally beneficial electricity for offshore applications. The PB3 PowerBuoy can be customized to fit customer needs, including monitoring, surveillance, subsea charging and connectivity for the offshore oil and gas industry, science and research, and telecommunications markets.

OPT’s contracts with EGP follow closely on the heels of the company’s successful PB3 PowerBuoy deployment in the Central North Sea for Premier Oil in August of this year.