Arctic Warming Cascades Through Ocean and Over Land 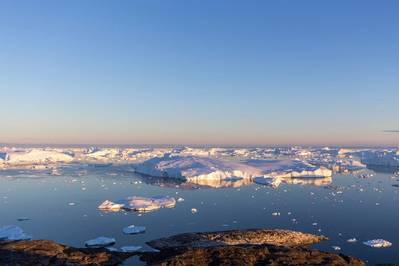 The Arctic region has had its second-warmest year since 1900, continuing a pattern of extreme heat, ice melt and environmental transformation at the top of the world, scientists reported Tuesday.

In the 15th annual Arctic Report Card, released by the U.S. National Oceanic and Atmospheric Administration (NOAA), researchers detail the stark ways in which climate change is altering the long-frozen region.

“Taken as a whole, the story is unambiguous,” Alaska-based climate scientist Rick Thoman, one of the report's editors, said in a statement. “The transformation of the Arctic to a warmer, less frozen and biologically changed region is well underway.”

Among the milestones hit this year was the second-lowest minimum sea ice extent in the satellite record, at 3.74 million square kilometers reached on Sept. 15. That was beaten only by the low in 2012, when a late-season cyclonic storm broke up much of that year's remaining ice.

The minimum sea ice extent has never risen above its level in 2007 since then. 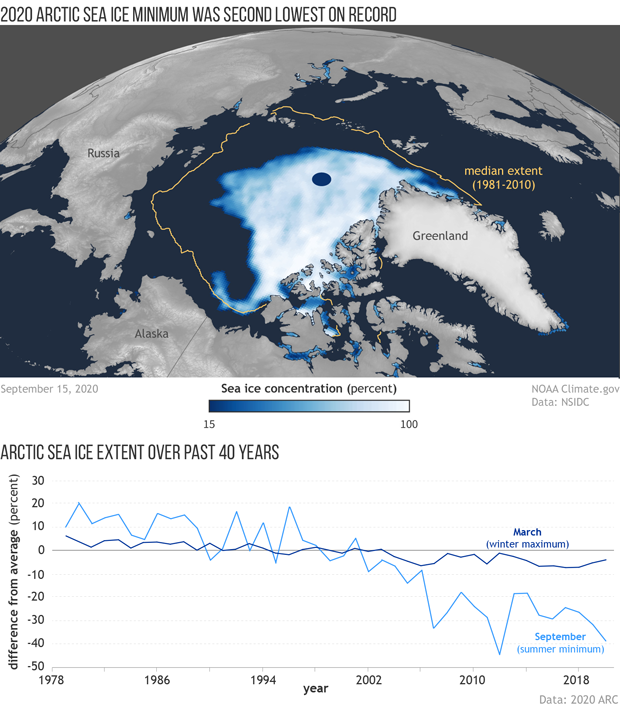 (top) Arctic sea ice concentration on September 15, 2020—the day of the smallest extent of the year—compared to the median extent (gold line) reached on this date in Septembers from 1981 to 2010. (bottom) Annual maximum (dark blue) and minimum (light blue) ice extents from 1979 to 2020. Credit: NOAA Climate.gov, based on data from the National Snow and Ice Data Center and the 2020 Arctic Report Card.

The sea ice is also thinner, younger and more fragile and vanishing sea ice is leading to warmer Arctic waters, the report said, as sunlight permeated the ocean rather than bouncing off the white surface of ice.

Mean sea-surface temperatures in the Arctic Ocean in August were 1 degree to 3 degrees Celsius above the 1982-to-2010 average, the report said, with "exceptionally warm" temperatures seen in the Laptev and Kara seas off Russia early in the year.

"We're starting to see more of these feedbacks," Perovich told Reuters. Research on the Arctic now "is more than an intellectual exercise in understanding nature. These changes are having consequences for people living today."

The warmer waters were also connected to warmer air over Arctic lands, triggering glacial melt along the fringes of the Arctic Ocean. A record-hot summer in Siberia, linked to climate change, led to massive wildfires in the area as well as delaying the refreezing of the Arctic Ocean.

From year to year, the warming trend has shifted to focus on different areas around the Arctic. This year's warmth centered around Siberia. In 2019, the hotspots were around the Bering and Chukchi seas off Alaska, with soaring water temperatures and widespread bird and mammal die-offs recorded.

Water entering the ocean from melting glaciers and the ice sheet covering Greenland is raising global sea levels. In 2019, the most recent year for which glacier data is available – and a record-hot year in Alaska – the state's glaciers lost more mass than in any other year on record, the report card said.

These Tiny Oceanic Creatures Are Essential to Tackling Climate Change

The ocean withdraws about one third of the CO₂ in the atmosphere, mitigating climate change and making life possible on Earth.