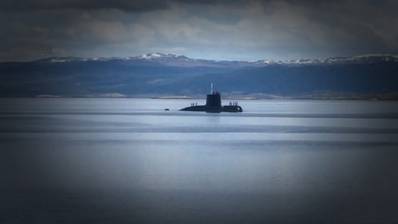 Argentina and other South American countries are likely to maintain or increase their submarine programs despite the scrutiny that has followed the fatal loss of an Argentine sub in South Atlantic waters last month, defense specialists said.

The disappearance of the ARA San Juan with 44 crew members aboard has put pressure on Argentine President Mauricio Macri to consider boosting spending for the military, including the country’s two remaining submarines. Military spending sharply decreased after the end of Argentina’s dictatorship in 1983.
“Macri has to take strong steps to rebuild the military after three decades of hyper-low defense spending. Submarines will be a fundamental instrument in that framework,” Fabian Calle, a geopolitics professor at Universidad Austral and Universidad Catolica in Buenos Aires, said on Tuesday.
The government declines to comment about the plans it has for its submarines until the investigation into the Jan Juan disaster is complete.
Argentina spends about 1 percent of its gross domestic product on defense, less than its neighbors Chile, Brazil and Peru.
Peru has six subs, Chile four and Brazil plans to increase its five-vessel fleet by four over the next few years. Ecuador and Venezuela each have two and Colombia has four.
“Submarines are an excellent strategic weapon to use in inter-state conflicts. Thankfully, in our region we have optimal relations with our neighbors. But that can change,” Calle said.
Subs are used to patrol sovereign maritime areas and can transform themselves “into a lethal and surprising threat to a potential adversary,” the Chilean navy says on its website.
Argentina learned a harsh lesson of submarines’ military value during the 1982 Falklands War, when a British sub sank the ARA General Belgrano cruiser. It was the only major ship Argentina lost in the war over the disputed Falkland Islands, which Argentina calls the Malvinas.
If anything, Argentina’s commitment to submarines is likely to grow in the years ahead, said Omar Lamrani, an analyst with Texas-based geopolitical consultancy Stratfor.
“Since the military budget was cut after the Falklands War, Argentina realized that modernizing and putting money into its submarines can be a very cost effective way of staying ready for any conflict, however unlikely, without having to break its budget by buying much bigger surface vessels,” Lamrani said.
However, there have been questions since the San Juan went missing on Nov. 15 over the resources Argentina has devoted to its submarine fleet. Relatives of San Juan crew members have said they suspect training and maintenance was inadequate.
The Argentine navy says water likely entered the San Juan’s snorkel, causing a battery short circuit and explosion. This scenario could point to deficiencies in the upkeep of the vessel, which will be examined as part of what Macri promises will be an unflinching investigation.
Macri has said the sub was in perfect working order when it embarked on its last patrol mission.
‘Underdog’ Weapon
Siemon Wezeman, an analyst with the Stockholm International Peace Research Institute, said plans to modernize military equipment in Argentina had been repeatedly delayed, canceled or scaled down due to lack of funds.
But tight budgets boost the argument in favor of submarines, Wezeman said.
“If a war comes along, a small investment in submarines can give your enemy a very big headache,” he said, calling the vessels “an extremely useful weapon for the underdog in a naval war”.
Another reason to keep subs on line is that if a country gives them up it is slow and costly to start again from zero, he said.
“They’re the only ship that’s meant to sink. So they need a whole different, highly specialized type of training that can only be kept up through practice,” Wezeman added.
(Reporting by Hugh Bronstein; Editing by Frances Kerry)
• Argentina • Argentine Navy • Brazil
Email