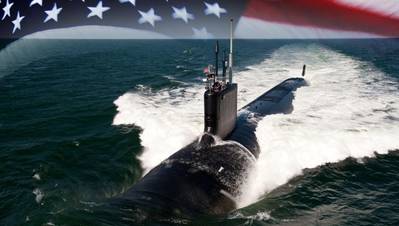 A Virginia-class attack submarine will be called the USS Arkansas, Secretary of the Navy Ray Mabus announced.

Secretary of the Navy Ray Mabus announced that SSN 800, a Virginia-class attack submarine, will bear the name USS Arkansas.
“As we sail deeper into the 21st century it is time for another USS Arkansas; time to keep that storied name alive in our Navy,” said Mabus. “She will sail the world like those who have gone before her, defending the American people and representing our American values through presence.”
Virginia-class subs have enhanced stealth and surveillance capabilities. They can attack targets ashore with Tomahawk cruise missiles and engage in anti-submarine and anti-ship warfare, mine delivery and minefield mapping. They also can deliver special forces.
The last ship to have the name USS Arkansas was a Virginia-class nuclear-powered guided missile cruiser commissioned in 1980 and decommissioned in 1998, according to the U.S. Navy.
The 377-foot sub will weigh 7,800 tons, according to a press release from the Navy. It can operate at more than 25 knots submerged and will be powered by a nuclear reactor that will not have to be refueled over the life of the ship.
It will be built by General Dynamics Electric Boat (GDEB) and Newport News Shipbuilding. Construction begins in 2018, with the sub joining the fleet in 2023.
• General Dynamics • Newport News Shipbuilding • United States
Email