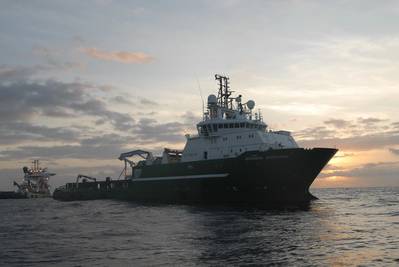 •    Annual Revenues up 10.5% partly due to a 5.9% increase in the size of the fleet and a positive offshore demand environment
•    Utilization rate of the fleet remains at a high level at 89.5% (-0.9 pts compared with 2012), despite the increase in the size of the fleet, impacted by the transit of some vessels in order to adapt to regional market conditions
•    Average daily rates continue to increase regularly for supply and subsea vessels (+3.8%) as well as for crewboats (+7.1%)
•    Foreign currency movements versus the Euro in 2013 (most notably versus the U.S. Dollar) impacted revenue growth in both the full year 2013 (-2.6 pts) and 4th quarter (-3.3 pts) compared with the corresponding periods in 2012
•    Revenues in the fourth quarter were stable at €331.6 million compared to the previous quarter (-0.3%) as new vessel deliveries had little impact on the quarter, all having been delivered during the second half of the quarter and the previously announced sale of three older vessels, which had almost no revenues during the quarter

“2013 revenues of more than €1.3 billion, a complete range of 485 vessels with an average age of 6.2 years and the broad geographical reach of its activities makes Bourbon a leader in the offshore marine services industry,” said Christian Lefèvre, Chief Executive Officer of Bourbon. “Stability of utilization rates and a positive trend in annual average daily rates are solid fundamentals in a context of continued fleet growth with 38 new vessel deliveries for a net increase in the fleet of 27 vessels in 2013. Bourbon continues its focus on operational excellence and debt reduction via the Transforming for beyond action plan. The asset smart portion of this action plan is progressing well with the sale and bareboat charter of 24 vessels during 2013, the proceeds from which are primarily aimed at reducing debt.”

Deepwater offshore
-Activity remained high driven by a large number of exploration and development projects throughout the year
-Annual increases in day rates were partly due to certain contract renewals coming in at higher daily rates in West Africa and Latin America
-BOURBON’s fleet was stable overall in 2013 with deliveries of new vessels offset by the sale of older vessels
-During 2013, utilization rates were impacted by the transit of vessels to adapt to market conditions and in the fourth quarter, seasonal effects negatively impacted North Sea activities

Shallow water offshore
-The shallow water market continues to see the benefits of the replacement of older vessels as clients are seeking modern and efficient vessels to work for their new jack-up rigs
-Average utilization rates remained stable year on year despite double the number of new vessel deliveries in 2013, partly due to certain contract extensions and new contracts
-In general, average daily rates increased in all regions, especially in Latin America and Mediterranean/Middle East/India (MMI). They have been impacted by a regional mix effect due to the end of contracts in Australia and Brazil (where average daily rates and running costs are higher than in other regions)
-In the fourth quarter, the typical seasonal effects of the monsoons in Asia have not impacted BOURBON as most of the fleet has been fixed on long term contracts

Subsea Services
-Improved activity due to the continued increase in number of wellhead installations with almost 600 wellheads ordered by the industry in 2013, a growth of approximately 40% over the prior year
-Continued increase in average daily rates during 2013 reflects the combination of improving demand and better terms on contract renewals
-During 2013, one new MPSV was delivered in the first quarter and as previously announced, an older MPSV was sold in the fourth quarter

Outlook
The demand for offshore vessels is growing, helped by a relatively stable oil price during the past several years.

Deepwater offshore vessel demand growth continues, driven by large projects and the exploration programs in remote and extreme locations. The high number of large PSVs coming out of the shipyards could negatively affect the spot market. This should have only a small impact on Bourbon, taking into account the high contractualisation rate of it PSVs.

The demand in the shallow water offshore market continues to be driven more than ever by the renewal of the fleet and operational excellence. In this segment, Bourbon will consolidate its leadership on the strength of its more than 100 Bourbon Liberty series ships with diesel electric propulsion and DP2 (Dynamic Positioning 2), which offers its clients operational safety and fuel savings.

The Subsea services market was buoyed by the growing number of subsea wellheads and the development of new deepwater oil fields. Three of the five vessels in the Bourbon Evolution 800 series that will be delivered in 2014 are already contracted.

Active Fleet Management
In line with the Transforming for beyond Asset Smart action plan, a total of 21 vessels were transferred to ICBCL during 2013, as part of the sale and bareboat charter agreement for up to 51 vessels signed with ICBCL on April 9, 2013. The transfer of the remaining maximum 30 vessels should take place during the first half of 2014.

In addition, at the end of November 2013, Bourbon signed an agreement with Standard Chartered Bank (SCB) for the sale and bareboat charter of six newbuild vessels. The ownership of three vessels has been transferred and the remaining three vessels will be delivered to SCB during the second half of 2014.

In addition to vessel disposals in line with the Transforming for beyond action plan, Bourbon sold seven older vessels, including two AHTS (Anchor Handling Tug Supply) vessels which the company continues to operate under a bareboat charter agreement, two AHTS vessels sold without a bareboat charter, a tug, an MPSV (Multipurpose Supply Vessel) from the Subsea Services fleet and a PSV (Platform Supply Vessel).

Change in Bourbon Consolidation Scope
As of January 1, 2013, certain companies that were previously consolidated proportionally have been fully consolidated. The impact of this change in consolidation scope is not significant for the group. Consequently, and in accordance with regulations, no pro forma financial statements have been established for the current period.