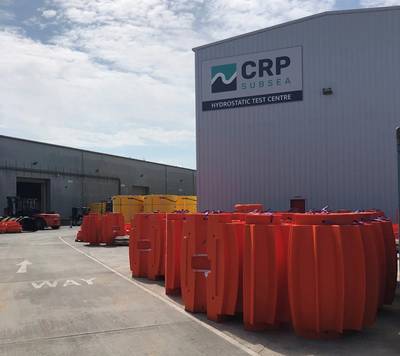 CRP Subsea delivered contracts providing more than 500 Rotating Buoyancy Modules (RBMs), which adds to previous deliveries that have been installed and successfully operating for the past three years. They will also be attached to deepwater high-temperature, high-pressure flowlines to mitigate pipeline buckling on the seabed.

The RBMs will protect the pipeline by allowing it to roll on the seabed reducing lateral friction and berm creation, thus eliminating rogue buckles and reducing axial walking in the pipeline. Using this innovative buckling mitigation buoyancy solution will reduce the risk of pipeline failure and increasing the lifetime of the field.

Rotating Buoyancy Modules (RBMs) are used to mitigate buckling in seabed pipelines. Buckling occurs during start-up and shutdown sequences as the thermal fluctuations cause pipelines to expand and contract, leading to problematic buckling along its length. Traditionally non-rotating cylindrical buoyancy modules have been installed along sections of the pipeline to reduce the weight and friction in that section and promote controlled bending. However, in certain conditions the modules have displaced seabed material to build ridges (berms) that have then restricted the lateral movement that the modules were installed to promote. The RBMs roll on the seabed, thereby reducing lateral friction and berm creation.