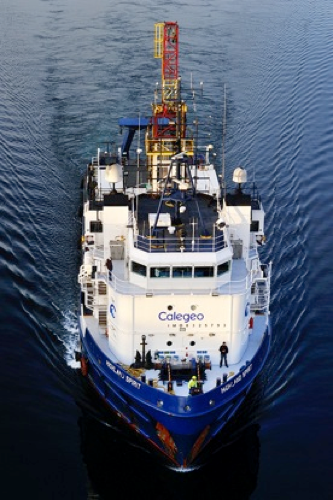 Calecore Directors Sarah Cashmore, Steven Lloyd and Richard Parkinson announce purchase of a geotechnical drilling rig for their DP2 vessel 'Highland Spirit', and also that the company has secured a third month rotation for the Kara Sea project in the Russian Arctic.

Earlier this year Calecore obtained an investment from Netherlands based investment company VEP which sees the board of Calecore unchanged, but the drill rig purchase is viewed as the start of bringing significant and key assets to the balance sheet.  This investment also gives leverage to Calecore’s ever growing global presence, with 1 Raffles Quay, Singapore being added to the Stavanger and Moscow bases in September of this year.

Calecore’s Geotechnical and Geophysical Divisions Calesurvey and Calegeo are reporting strong activities throughout Q3 and a healthy order book for the next two quarters.   Both divisions have had extensions granted to their Kara Sea site survey programme with their vessels DP2 Highland Spirit and Kommandor Stuart just entering into their third month of operations.

In other company news, Calegeo’s works onboard the Bourbon Emerald have also been extended with the delivery of deep water WROV-borne geophysical and environmental data acquisition coupled with coring and Seabed CPT, whilst Calesurvey’s 80m multi-role survey vessel Kommandor Calum has just completed ROV and geophysical works in the North Sea before her scheduled departure to NW Africa for deep water ROV and geotechnical site survey.