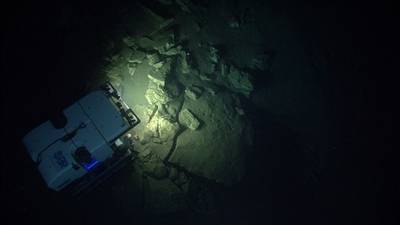 Ocean explorers in July on NOAA Ship Okeanos Explorer discovered a wide diversity of seafloor features and communities of life in the largely unexplored deep-sea canyons off the northeast U.S. coast. Now through August 16, as the expedition continues, the public can join the mission as "citizen scientists," at oceanexplorer.noaa.gov/okeanos, to see live seafloor video and listen as scientists discuss their observations in real time. During the expedition's July leg, there were nearly 60,000 visits to the live streaming video.

Canyons represent some of the most striking features of the continental slope off the U.S. East Coast and may also be among the most productive areas in the deep sea. Organic matter and nutrient-rich sediments are often concentrated in these areas and strong currents flow through the steep and rugged terrain of the canyons, exposing hard substrates. With an increase in food availability and a variety of different habitat types across varying depths, submarine canyons may contain higher biodiversity and biomass than the adjacent continental slope, and are likely places to observe deep-sea corals, sponges, and other deep-sea marine organisms.

During the July leg of the expedition, the ship's multibeam sonar detected bubbles rising from the seafloor in several locations about 90 nautical miles southeast of Nantucket, Mass. These water-column plumes were traced to seafloor seeps where explorers observed chemosynthetic communities of life supported by chemicals rather than by sunlight. These are the northernmost seeps detected to date on the U.S. Atlantic margin.

The discoveries are expected to help fisheries and other ocean resource managers make better-informed decisions about how to manage, use and protect the ocean and its resources. Scientists believe the need to learn more about these relatively undisturbed canyon ecosystems is becoming more urgent, particularly as the potential for fishing, marine mining, and hydrocarbon exploration extends into the deep sea.

"We found these little-explored canyons are highly dynamic," said Tim Shank, a deep-sea biologist from Woods Hole Oceanographic Institution, who participated from ashore. "With each dive of the ROVs (remotely operated vehicles that are undersea robots with cameras), we documented vertical walls with jagged rock failures, collapsed features, and extensive debris fields. Each canyon also appeared to host different biological communities-even different depths within the same canyon would reveal different types of coral and sponge ecosystems.

"As we explored different sides and depth zones of these canyons, we discovered a broad physical and biological diversity," said Shank. "One canyon would host great animal diversity but low animal abundance and the next canyon would reveal just the opposite. As with any new deep-sea region we explore, we observed many suspected new species and remarkable range extensions of known species. All these observations will be highly informative to design and implement ocean conservation and management strategies in the near future."

Explorers also observed several instances of new coral life establishing itself, hundreds of skate and cat shark eggs on the seafloor and attached to deep-sea corals, and numerous octopus and squid guarding clutches of eggs. Initial impressions revealed these canyons are hot spots for biodiversity, hosting more than 25 species of corals, and hundreds of associated animals.

Andrea Quattrini, a Ph.D. student from Temple University in Philadelphia, said the expedition provided an immense opportunity for the ocean science and management communities to educate and train the next generation of explorers and deep-sea scientists.

"Their ability to interact with thirty to forty scientists with different areas of expertise, and the free exchange of ideas and discussion, further advanced the exploration and findings by defining new questions and outlining exciting avenues for future research," she said.

Teachers may take advantage of an Expedition Educational Module at http://go.usa.gov/jn2h. The site provides products tied to the expedition including standards-based lesson plans and ocean-career connections.

Brendan Roark, a geographer from Texas A&M University who participated in the expedition from the ship, believes corals in the area may live as long as 4,000 years. "Deep-sea corals provide a new archive that can help us reconstruct past ocean and climate conditions," he said. "They grow in a shrub-like fashion and most importantly, they deposit annual growth rings much like trees do. Because of their extremely long life spans, they may develop high resolution records of oceanographic and climate variability."