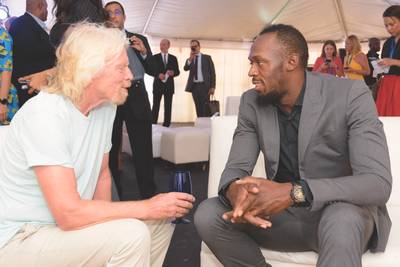 British billionaire Richard Branson and two dozen Caribbean nations and territories announced in Jamaica on Thursday the creation of a multi-million dollar program to turn the hurricane-prone region into a green tech hub resilient to disasters.

Hurricanes Maria and Irma left trails of destruction as they crashed through the region last September.

Branson has lived in the British Virgin Islands for more than a decade and weathered Hurricane Irma inside a cellar on Necker, his private island.

After announcing the initiative at a gathering in Kingston, the business magnate said the more than $4 million initiative serving 26 countries would give start-ups easier access to financing for large projects.

"Just the fact that we've got ... pretty much every single Caribbean nation signed up and a lot of agencies willing to work with them gives a good chance of speeding the process forward," Branson told the Thomson Reuters Foundation by telephone.

Partners include the Inter-American Development Bank, private firms and countries from Grenada to Anguilla and Dominica.

The effort kicked off by rolling out a handful of projects, including an announcement that Airbnb, the home-sharing website service, was expanding to the Caribbean its "Open Homes" program that matches displaced disaster victims with local hosts with spare rooms free of charge.

Organizers also unveiled an award under the patronage of Usain Bolt, the eight-time Olympic gold medalist from Jamaica, that will recognize leading countries, businesses and individuals making the most strides toward a green future.

The announcement followed a December gathering in Paris where Caribbean nations banded together to seek the restructuring of some $1 billion in debt to free up cash for coastal defenses and buffer communities against the effects of global warming.

Scientists agree that climate change can affect the frequency, intensity and tracks of hurricanes.