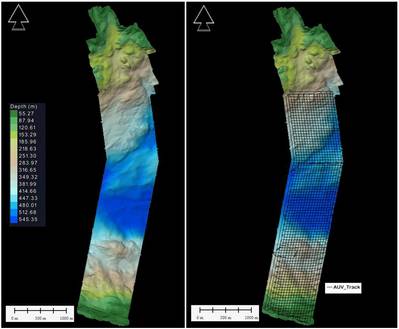 In September 2018 DOF Subsea Norway AS was awarded a contract for The Norwegian Public Roads Administration, Statens Vegvesen (SVV), to perform geophysical mapping of a 5km2 area in Bjørnafjord in Norway. The project was executed using the Hugin AUV Chercheur manufactured by Kongsberg Maritime and owned and operated by Canadian company Ocean Floor Geophysics Inc. (OFG) in combination with the small survey catamaran GeoCat owned by DOF Subsea Norway AS.

The aim of the work was to obtain the necessary basis for engineering design services for a bridge over Bjørnafjord in connection with the Ferry Free E39 project. The assignment included high-quality geophysical surveys, (bathymetry, shallow seismic, and side-scan sonar) in order to provide SVV with detailed high-resolution geophysical data in an area approximately 5.5km long by 800m wide.

The project was planned as a low logistics shore-based launch of an AUV, supported by the small vessel equipped with a system to provide positional updates to the subsea vehicle, eliminating the requirement for traditional remotely operated underwater vehicle (ROV) and an offshore sized vessel, but still providing the high data quality associated with the survey systems of the Hugin class of AUVs.

The AUV containers were set up at a quayside location, where a storage area and processing office were also established and project personnel were accommodated in a hotel nearby.

Working only during daylight hours, the data was collected in less than a week. In addition, detailed acoustic surveys were carried out at a selection of possible anchor locations to discover any objects with a diameter of 0.5m or more that could possibly obstruct the placement of anchors. And, when the AUV was not permitted to navigate between the anchors of an existing fish farm located in the survey area, Geocat’s hull mounted seismic equipment and multibeam echosounder were used. 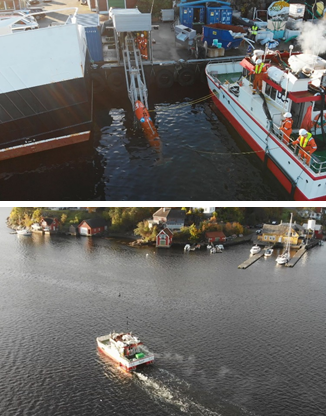 Figure 0 2 (top) Quay-launch of AUV. Figure 0 3 (bottom) AUV secured port stern and guided out to work area, where it was released to collect data close to the seabed. (Credit: DOF Subsea)

In all, 180km of data was collected with a AUV survey suite including multibeam bathymetry (MBES), sub-bottom profiler (SBP), sidescan (SSS) and synthetic aperture sonar (HISAS). The advanced terrain following algorithms of OFG AUV Chercheur allowed for excellent data quality even in the very rough, undulating and rocky terrain varying from 40m to 560m water depth, with slopes exceeding 60 degrees. Seismic data is particularly of great importance to the customer when it comes to bridge engineering and DOF received highly positive feedback from SVV on the high quality of the data provided. 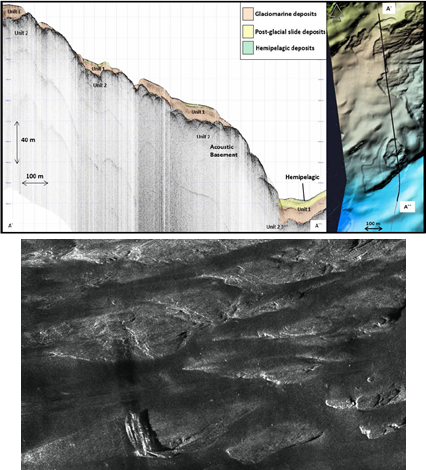 Commenting on DOF Subsea’s survey method and performance Tore Thomassen, responsible for seabed conditions on The Fjord Crossing Project, Ferry Free E39, said, “In connection with the geophysical investigations needed for Bjørnafjord, Statens Vegvesen Region Vest, chose to go with an unknown and previously untested method for this type of topographically very challenging terrain. In competition with more traditional geophysical and tested methods we chose to use an AUV as it was offered by DOF Subsea Norway AS in cooperation with Ocean Floor Geophysics Inc. The survey was executed effectively and within shorter duration than promised. The data set displays good quality and is well within the requests for the specifications of the project.

“Statens Vegvesen Region Vest is very satisfied with the cooperation and the execution of this particular project and view the use of AUV as a future tool for marine seabed investigations.”

Matthew Kowalczyk, CEO OFG, added, “This is the second shore-based AUV project executed using DOF Subsea’s GeoCat and the OFG AUV Chercheur, the first being a subsea pipeline inspection in the North Sea in March 2018. The successful completion of this low logistics survey further validates the approach that OFG and our partners have taken to developing systems tailored to our customer’s needs. SVV chose a solution that demonstrates their commitment to deploying state-of-the-art systems but with a keen eye to the costs savings.”

DOF EVP Jan-Kristian Haukeland, said, “We are excited about the successful completion of this project. It demonstrates the capability of DOF Subsea, in collaboration with our partners, to rapidly develop new systems and technology, deploy them in a cost effective and timely manner, while continuing to exceed the quality and safety standards our clients expect.”