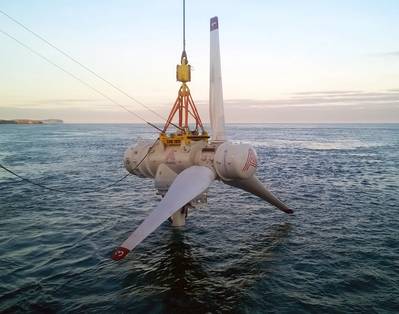 Tidal stream energy could plummet below £80 per MWh by 2035 if current opportunity is realized, according to a recent report by the UK-based Offshore Renewable Energy (ORE) Catapult.

The report ‘Cost Reduction Pathway of Tidal Stream Energy in the UK and France’ report, produced by the Offshore Renewable Energy (ORE) Catapult as part of the Interreg FCE funded TIGER project, documents the global state of the tidal market, and presents a cost reduction trajectory taking tidal stream energy from its current price of £260/MWh down to £78/MWh by 2035.

The report found that drivers for tidal stream energy (TSE) cost reduction include scaling up the size and power of tidal devices, and development of larger TSE farms.

TSE projects generate over 80% of materials from the local supply chain, create up to 45 jobs per MW deployed - exceeding the wind and solar industries, and could contribute up to £17 billion to the UK economy by 2050," ORE Catapult said.

According to the report,  UK could capture 25% of the international market value of TSE through export.

The report suggests that 877MW of TSE could be deployed in the UK by 2035, in agreement with the Marine Energy Council’s ask for the UK Government to commit to 1GW of marine energy deployment by 2035.

The report also highlights that TSE could dramatically improve domestic energy security and reduce costs in the future energy system due to its predictable nature.

Caroline Lourie, Technical Manager, at the European Marine Energy Centre (EMEC) said: “The UK remains the most attractive global market for tidal stream energy, with over 10 GW potential. In 2021, £20 million a year was ring-fenced for the sector through the UK government’s Contracts for Difference scheme; an important endorsement of the industry.

However, to drive down costs so that tidal energy is competitive with other renewables, a huge ramp-up of installed capacity will be needed over the next decade. For this to happen, we need long-term policy support and continued ring-fenced funding.”

The report called on policymakers in the UK and France to support the TSE cost reduction trajectory by committing to industry deployment targets, ensure TSE has a secure route to market such as ring-fenced funding in the UK Government’s Contracts for Difference rounds, and streamline the consenting process to strengthen the project pipeline.

KBR has won a contract to provide engineering services for an offshore energy storage project for CrossWind, a joint venture…