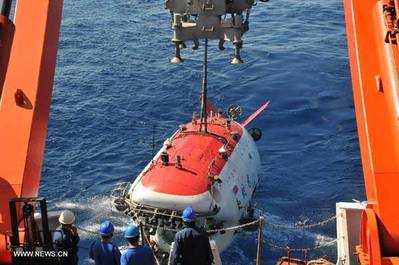 "The Jiaolong began to dive at 9 a.m. Wednesday and arrived at its scheduled depth about 110 minutes later. We sailed northwest, climbed a forty-meter-high slope and found a large deposit of iron-manganese," said Tang Jialing, pilot of the submersible and a researcher from the National Deep Sea Center. Eight samples were taken from these deposits.

"Since one of the samples was broken by the sub's robotic arm, a round core inside could be identified as volcanic lava. The materials covering the core are iron and manganese oxides, which need tens of thousands of years to form," said Zhou Huaiyang, a professor at Tongji University.

The Jiaolong will carry out another two dives in the area, as well as conduct research on the Jiaolong Seamount, which was named after the sub after scientists aboard the vessel discovered it. Zhou said he hopes more rock samples will be collected from the seamount during the two dives.

During its 113-day mission, the sub will engage in scientific research in the South China Sea, the northeast Pacific Ocean and the west Pacific.

The mission marks the start of a five-year trial period for the Jiaolong before it starts regular operation.