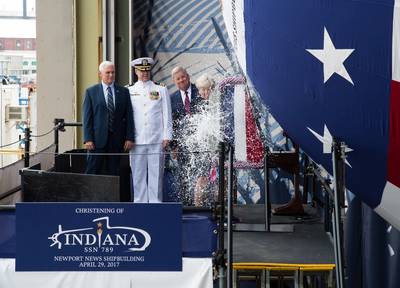 Vice President Mike Pence, who previously served as the 50th governor of Indiana, delivered the ceremony's principal address.
“[President Trump]sent me here today on this historic occasion as a sign of his deep commitment to the Armed Forces of the United States of America, and to his commitment to make the strongest fighting force in the world even stronger still,” Pence said. Speaking to the shipbuilders, he acknowledged their dedication and skill: “You have the gratitude of the commander in chief for your unwavering commitment to your country, your patriotism, your craftsmanship, and rest assured, President Trump will honor your commitment with historic investments in our national defense.”
Indiana (SSN 789) is the 16th Virginia-class fast attack submarine and the sixth Virginia-class Block III submarine. The submarine is the third U.S. Navy ship to be christened with the name Indiana. The first Indiana (BB-1), the lead ship of her class of battleship, served in the North Atlantic and later participated in the blockade of Santiago de Cuba during the Spanish-American War. The second Indiana (BB-58) was a South Dakota-class battleship that earned nine battle stars for her service in the Pacific Theater in World War II. BB-58 fought in the Battle of the Philippine Sea and participated in the invasions of Tarawa, Kwajalein and Okinawa, and bombarded Saipan, the Palau Islands, the Philippines and Iwo Jima.
Indiana will have the capability to attack targets ashore with highly accurate Tomahawk cruise missiles and conduct covert long-term surveillance of land areas, littoral waters or other sea-based forces. Other missions include anti-submarine and anti-ship warfare; mine delivery and minefield mapping; and special forces delivery and support.
Diane Donald, wife of retired Adm. Kirkland H. Donald, director of Naval Nuclear Propulsion from 2004 to 2012, served as the ship's sponsor.
“It’s the honor of a lifetime to be here today,” Donald said. “While the size of the submarine alone is stunning, the complexity inside sets it apart from any other machine ever built. These ships are second to none, made in America by truly remarkable Americans.”
Virginia-class submarines, built under a unique teaming arrangement between General Dynamics Electric Boat and Huntington Ingalls Industries-Newport News, are 7,800 tons and 377 feet in length, have a beam of 34 feet, and can operate at more than 25 knots submerged. They are built with a reactor plant that will not require refueling during the planned life of the ship-reducing lifecycle costs while increasing underway time.
Other ceremony participants included Rep. Bobby Scott, D-Va.; Sen. Joe Donnelly, D-Ind.; Sec. Sean Stackley, acting secretary of the Navy; Vice Adm. Joseph Tofalo, commander, Submarine Forces; Adm. Tom Fargo (U.S. Navy, Ret.), chairman of the board, Huntington Ingalls Industries; Mike Petters, president and CEO, Huntington Ingalls Industries; Matt Mulherin, president, Newport News Shipbuilding; and Jeffrey Geiger, president, General Dynamics Electric Boat.
Stackley spoke of the U.S. Navy’s important presence around the world. “More than a hundred U.S. Navy ships are underway, providing assurance to our allies, maintaining persistent surveillance in regions of interest, conducting special operations undetected, safeguarding the choke points of the world, standing poised to assure access to strike if necessary, and providing humanitarian relief if needed. And all the while, [Navy ships are] serving as the enduring, reliable deterrent that underpins our nation’s security.”
Speaking on behalf of the state of Indiana, Donnelly thanked the shipbuilders for their service to the U.S. Navy and the Indiana crew. “This crew is going to be at the very tip of the spear,” he said, “and you have given them the tools, the equipment, the ability to accomplish everything.”
About 4,000 Newport News shipbuilders have participated in Indiana’s construction in partnership with General Dynamics Electric Boat. Construction began in September 2012 and is about 90 percent complete. The submarine is on track to be delivered to the Navy this year.
“It’s hard to describe what it’s like to build one of the most complex machines in the world,” said Newport News Shipbuilding President Matt Mulherin. “For our shipbuilders who do this every day – they can even lose perspective of the contributions they are making to our Navy and to our nation. For them, it’s all part of a day’s work—a long, hard, honest day’s work. However, as you look upon this magnificent vessel, I think you’ll agree, it’s no ordinary job. In fact, it’s pretty extraordinary. Our shipbuilders define what ‘Made in America’ means.”
• Huntington Ingalls Industries • General Dynamics • America
Email