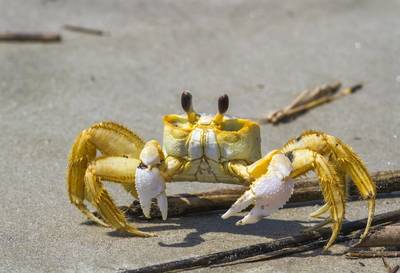 Scientists Discover New Method of Communication in Crabs: Ghost crabs use structure in their stomach to communicate when agitated.

Using a combination of research methods, the scientists found that Atlantic ghost crabs – native to the western Atlantic – use a structure in their stomach called the gastric mill to produce stridulation sounds. Stridulation is the act of producing sound by rubbing certain body parts together, such as insects do when they rub their legs.

Scientists have known that crabs use this same leg-rubbing technique to communicate, as well as specialized ridges on the claws and arms that are rubbed together to produce noise. But when Jennifer Taylor, an assistant professor at Scripps and lead author of the study, heard the sounds of stridulation from her ghost crabs, neither their legs nor claws were moving.

Collaborating with Damian Elias from UC Berkeley, Taylor verified where she thought the noise could be coming from. The stomachs of many crustaceans contain a gastric mill, a three-pronged structure used to grind food. Using lasers to pinpoint areas of the crab that could be responsible for the noise and then analyzing the sound signature, they found that the interior of the crab where the stomach is located was responsible for producing the sound.

"The first time I heard the rasp, I couldn't believe how clear the sound of stridulation was, even though the crab's claws were outstretched and clearly not producing sound,” said Maya S. deVries, a former postdoctoral researcher at Scripps who in 2020 will be an assistant professor at San Jose State University.

A clever use of medical technology was used to find the sound source. Teaming up with the UC San Diego Medical Center in San Diego’s Hillcrest neighborhood, Taylor and deVries performed fluoroscopies on their ghost crabs. They fed them fluoro bromide, the blue liquid given to patients to dye their organs before the procedure.

“For this approach to work, we had to get the crabs to ingest the dye,” said Taylor. “We eventually succeeded and were able to see the gastric mill teeth in the x-ray.”

Thanks to the procedure, they saw that when agitated, the crabs were indeed using the gastric mill to produce the stridulation noises. The team used a variety of objects, including other crabs and toys, to agitate the ghost crabs, causing them to display the classic crab defense posture, with arms spread and claws ready to attack. Looking at the fluoroscopy screens, the gastric mill was grinding when the crabs were disturbed. The researchers hypothesize that this movement is voluntary, or perhaps controlled by hormones that can affect the organ.

Ghost crabs and their close relatives fiddler crabs are among the most studied crabs in terms of communication and sound production, but until now scientists were unaware the gastric mill was also involved. The team states that it’s quite possible other crabs are using the same form of communication.

“All crabs have a gastric mill and the capacity to communicate with sound,” said Taylor. “It will be interesting to see how our understanding of crustacean communication unfolds.”

This study was funded through a National Science Foundation Postdoctoral Fellowship and the Marine Biology Research Division at Scripps.