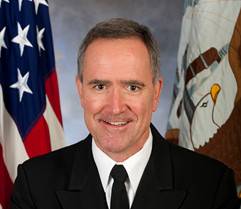 In a 35-year career in which he rose to the rank of Vice Admiral in the U.S. Navy, Connor commanded at the ship, squadron and task force levels. His assignments included command of USS Seawolf, a nuclear-powered attack submarine, Submarine Squadron Eight, Undersea Forces in the Western Pacific and the Arabian Gulf.
He held several concurrent titles during his last assignment; including Commander, U.S. Submarine Forces, Commander, Submarine Forces Atlantic and Commander, Allied Submarine Command. He served as commander of U.S. submarine forces from September 2012 until September 2015.
Vice Admiral Connor led the U.S. Navy Submarine Force into robotic undersea systems, achieving key milestones including the first operational deployment and recovery of an unmanned underwater vehicle from a submarine. He also led innovation efforts that began the shift away from undersea search operations based on expensive platforms and moved toward operations based on large numbers of inexpensive vehicles.
He has written extensively on the future of undersea warfare and is a sought-after speaker on undersea warfare topics. His education includes a B.A. in Physics from Bowdoin College and an M.A. in National Security Studies from the United States Naval War College. Vice Admiral Connor is currently the CEO of ThayerMahan Inc., a company he founded to accelerate the United States' ability to effectively and efficiently monitor ocean activity using autonomous systems.
Karl Kenny, Kraken President & CEO said, "We are delighted to welcome Admiral Connor onboard the Kraken team. Mike is recognized globally as one of the foremost authorities in undersea operations. He has a deep understanding of undersea robotics and autonomous systems and the value they provide to the maritime industry. The entire Kraken team is honored and privileged to learn from his knowledge and insights."
Vice Admiral Connor said, "Over the past several years, Kraken has methodically built an impressive portfolio of undersea sensor and robotics technology. During that same time, they have assembled a dynamic leadership and engineering team that understand and respect the transformational impact that robotics will play in the maritime industry of the future. I truly look forward to working with my fellow Board members in building the company."
• Arabian Gulf • autonomous systems • Karl Kenny
Email

Shipping, logistics, and marine services provider GAC has teamed up with a Singapore-based start-up to work on the delivery…