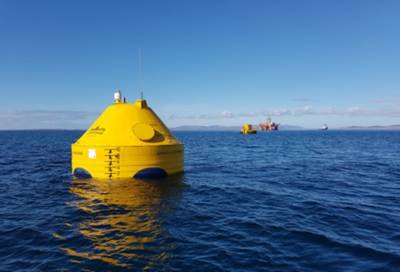 CorPower Ocean, a Sweden-based developer of wave energy converters, which has recently secured a 10-year license marine license in Portugal, said Tuesday it had attracted an investment of 7.3 million euros for its Portuguese wave energy technology project.

The CorePower wave energy converter is of point absorber type, with a heaving buoy on the surface absorbing energy from ocean waves and which is connected to the seabed using a tensioned mooring line. The device oscillates in resonance with the incoming waves, amplifying the motion and power capture.

The investment forms part of the HiWave-5 demonstration project aimed at bringing CorPower’s wave technology to a bankable product offering by 2024, by proving the survivability, performance, and economics of a grid-connected array of Wave Energy Converters. It is designed to unlock mainstream renewable project financing for subsequent commercial array projects developed by our customers, CorPower added.

"The investment will further build a world-class wave energy base in Viana do Castelo, northern Portugal, including R&D, Manufacturing & Servicing facilities. Proceeds will be used to demonstrate the first commercial-scale WEC within CorPower’s flagship HiWave-5 project - and for the long-term development of supply and service capacity for commercial wave energy farms," CorPower said.

CorPower Ocean CEO Patrik Möller said:"We are pleased to announce this positive development which will allow us to further ramp up operations in Portugal."

"We are gaining strong momentum with our new R&D Centre nearing completion and a fast-expanding team. While Portugal offers ideal natural conditions for the demonstration project it also crucially shares our passion and vision for ocean energy.

"There is firm political will to maintain its position as a leader in clean energy, which is reflected in this recent investment in CorPower. Our work is well-aligned with the Portuguese Industrial Strategy for Ocean Renewable Energies, which aims to create a competitive and innovative industrial export cluster. Together we will continue working closely to attract the attention of global utilities and project developers through next-generation wave energy.”

CorPower Ocean Country Manager Miguel Silva said the year 2021 would be pivotal as the company begins the Hi-Wave 5 demonstration. Silva said the demonstration would address fundamental challenges which have hampered wave energy in the past – most notably storm survivability and the cost to energy ratio.

"We have an important message to deliver that wave energy is reaching maturity with the capability to compete with established renewable energy sources in the next decade. However, its reliability and broader role as a balancing source is perhaps most compelling, offsetting the intermittency of wind and solar. In this respect we see massive potential in the future of combined wind, wave, and solar arrays," he said.