Life or Death in the Golden Hour 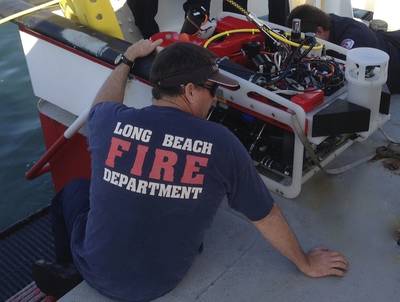 Finding a victim under water within the ‘Golden Hour’ determines whether a mission is a rescue or a recovery.  This life or death moment is given fresh hope with a technological breakthrough by the Los Angeles Long Beach Fire Department and Saab Seaeye engineers. The joint initiative hopes to cut the search time from an average of three hours, to less than 30 minutes using a cleverly modified Falcon ROV that can rapidly sweep the area.

Lives could be saved around the world if this system is adopted widely by rescue services, Saab Seaeye said. However, both teams initially faced an insurmountable technical problem. Pinpointing a victim on the seabed in dark and murky waters, with only a vague idea of where they entered the water, has long been a frustrating and time-consuming operation.

Current practice is to lower tripod-mounted sonar from a boat to the seabed at repeated intervals to scan the immediate vicinity – as soft tissue can only be detected at short range by very high-resolution sonar. This grid search from what is called the ‘point last seen’ can take up to three hours, with divers sent down at intervals to investigate any soundings. Finding a faster solution using ROV-mounted sonar seemed impossible, as the kind of high-resolution sonar system able to detect soft tissue is too large and heavy to be mounted on an ROV small enough to be manhandled into the water for rapid deployment.

Although the Falcon was the ideal ROV, both in size and technological resources, the team were faced with the problem of trying to fit a meter-long sonar device onto a meter-long ROV.

Then they came up with an ingenious solution: they split the sonar unit in two. The sonar head was fitted to the rear of the Falcon, with the electronics pack squeezed inside.

Yet this was only half the answer. The weight of this kind of sonar would normally sink or destabilize a small ROV.

Their solution came in two ways. First, Saab Seaeye engineers discovered a way to manage the buoyancy of the ROV and balance it to stay afloat and remain stable for accurate sonar scanning. Second, they found the Falcon’s five powerful thrusters could handle the weight and manoeuvrability, whilst working in currents and deep water.

He compares the benefits of an ROV over a diver: “An ROV doesn’t need to see in the dark, it can work tirelessly and can recover the victim with its manipulator.”

The Fire Department sees other opportunities for using the Falcon and its camera and video recording capability across the jurisdiction. “We can inspect the hulls of ships in the harbour, and check bridges after an earthquake,” Stan Jackson said.

Its power, maneuverability and intelligent electronics, along with an ability to fit a wide selection of tools, cameras and sensors, has made it one of most successful ROVs in the range from Saab Seaeye, the electric ROV manufacturer said.

The Falcon is used in many sectors across the world from the emergency services and homeland security, to the oil and gas industry, hydro engineering and marine science.