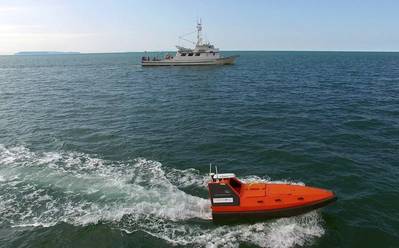 The first use of an autonomous surface vehicle (ASV) to perform bathymetry for updating the U.S. nautical charts for NOAA occurred in the Alaskan Arctic this summer, according to survey services provider TerraSond.

Surveying alongside TerraSond’s mother-vessel, the ASV collected data simultaneously on adjacent survey lines, effectively doubling the production rate. The ASV also surveyed by itself in areas too shallow and dangerous for the larger vessel to work, eliminating some risk to the surveyors.
“This is a force-multiplier for data acquisition. Operated in a semiautonomous mode, unmanned but supervised, one person can replace the three person crew it would normally take to operate a survey launch; it is definitely the future of seafloor mapping,” said TerraSond president Tom Newman.
Demand for hydrographic surveys for charting purposes is not going away. According to the 2012 NOAA Hydrographic Survey Priorities (NHSP), 511,000 square nautical miles of the U.S. seafloor is classified as “navigationally significant” and in need of modern, full-coverage surveys. Since 1993, when full coverage sonar surveys began, only about 39,000 SQNM or 7 percent has actually been completed. Without significant advances in technology such as the use of ASVs surveying the navigationally significant areas will required many decades or even centuries, according to TerraSond.
Also supporting the effort was Thomas Chance of ASV and his team, as well as Support Vessels of Alaska, Inc. in deployment and recovery onboard the R/V Qualifier 105 survey vessel. The survey was funded by the U.S. National Oceanic and Atmospheric Administration’s Office of Coast Survey (NOAA-OCS) as part of its mission to update the Arctic’s nautical charts.
TerraSond said it has been providing surveys under contract to NOAA for updates of the U.S. nautical charts since 1998. TerraSond provides precision land and marine geospatial, geophysical and geoscience survey solutions dedicated to imaging the earth worldwide. Headquartered in Palmer, Alaska, TerraSond operates both domestically and internationally through its multiple U.S. and foreign locations. Our domestic locations are Seattle; Houston and Corpus Christi, Texas.
TerraSond’s services are utilized by clients in the oil and gas, pipeline, power, telecom, renewable energy, mining, shipping, dredging, construction and engineering sectors as well as federal, state, local and foreign government agencies.
ASV is a manufacturer of autonomous marine systems with specialist expertise and experience in design, build, operation and maintenance, providing solutions for scientific, commercial and defense applications across the globe.
• Alaska • defense applications • National Oceanic and Atmospheric Administration