Ecosystem based Adaptation to Climate Change 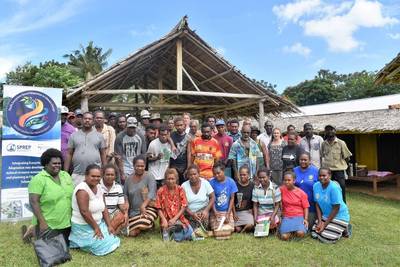 BMT scientist Dr Beth Toki (back, fourth from right) met with government officials and community stakeholders at Barana Village, on the outskirts of Honiara Photo BMT

The recently completed Solomon Islands EbA project focused on two locations: 1) Honiara, the nation’s capital; and 2) Wagina Island, a small island in Choiseul Province. Participatory community and government workshops built on existing information to document and map the critical ecosystem dependencies for local communities, then ascertain the vulnerability of these ecosystem services to climate change. Ecosystem services associated with the basic provisions of drinking water, food, raw materials (e.g. building materials) and income generation were commonly found to be vulnerable to climate change.
An EbA Options Assessment prioritised the key EbA preferences for building community resilience to this climate change vulnerability, noting also other non-climate threats to ecosystem services. Implementation Plans were subsequently developed. The community participatory approach has the added benefit of enhancing the community’s adaptive capacity through grass-roots recognition of the vulnerability and threats to their ecosystems, and will ensure the community are a willing part of the solution.
This work was undertaken for the Secretariat of the Pacific Regional Environment Program (SPREP) as part of their ‘Pacific Ecosystem-based Adaptation to Climate Change’ (PEBACC) project, and was presented to the Pacific Islands Roundtable for Nature Conservation in August. SPREP will now progress with the next phase of the PEBACC project, which will implement the on-ground EbA priorities.
• building materials • ecosystem services • Pacific Islands
Email

TDI-Brooks was contracted by Coastal Environments Inc. and Gray & Pipe, Inc. who received funding from NOAA’s Office of Ocean…