Environmental Studies Wrap Up for Exxon Off Guyana 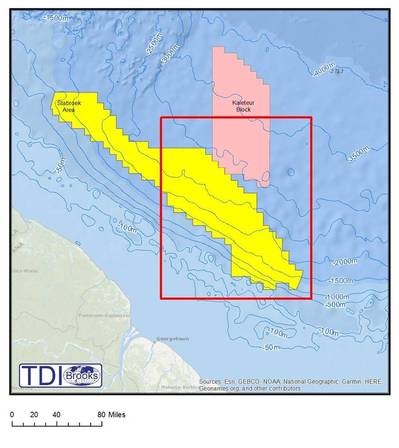 The US supermajor is operator of several blocks offshore Guyana, including Canje, Kaieteur and Stabroek, which is classified as one of the most prolific offshore oil potentials in South America and is still growing in reserves

In April ExxonMobil announced its 13th discovery in the Stabroek block called the Yellowtail-1 well. The 26,800-square-kilometer field is estimated to hold more than 5.5 billion Boep/d, and is located about 120 miles offshore Georgetown, Guyana.

The TDI-Brooks vessel earmarked for this project was the R/V Proteus, a multi-use vessel suited for a wide variety of oceanographic research duties. Efforts in Guyanese waters include support from two Guyanese marine mammal observers and a local Guyanese firm who provided stores and supplies for the vessel along with transportation and import/export clearances while working in Guyana.

Maxon Consulting provided the regulatory and interpretative reporting components for the studies.