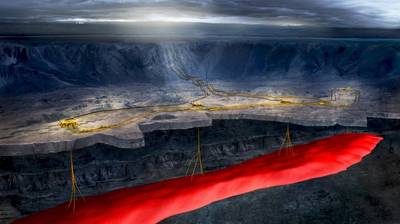 The first of two subsea compression stations built for Shell's Ormen Lange offshore field has arrived at Horsøy, OneSubsea’s Centre of Excellence, outside of Bergen.

This is according to Mads Hjelmeland – Managing Director, OneSubsea Processing, who shared the news via social media.

"This is an important milestone for the Ormen Lange Phase 3 project, which is of major importance for a low-carbon future. Many thanks to everyone who, through exceptional teamwork and dedication to excellence, have made this happen!," Hjelmeland said.

Ormen Lange lies at a water depth of 800-1,000 meters in the Norwegian Sea, 120 kilometers off the west coast of Norway.

The field development was sanctioned in 2004, and first gas was produced in 2007. It’s a fully subsea-to-shore production system, powered by hydroelectricity from the Nyhamna onshore facility, where the gas is processed, before being exported to the UK and Europe.

By utilizing subsea multiphase compression, the Ormen Lange Phase 3 project will unlock a further 30-50 billion cubic meters of natural gas from the field, increasing its recovery rate from 75% to 85%. The project is targeting startups near the end of 2025.