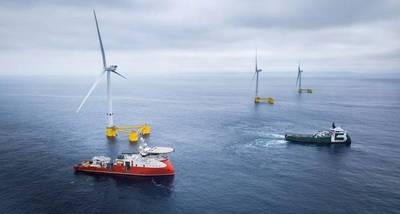 From a colossal wind farm floating amid choppy ocean waves to hundreds of solar panels on the surface of a dammed reservoir, Portugal is exploring innovative ways to boost renewable energy.

Mass use of such projects may still be too pricey, but trailblazers like Portugal stand to benefit when costs ease.

Bathed in sunshine all year round and washed by the Atlantic Ocean, Portugal is seen by many in the renewable power sector as the perfect spot to capture energy from a cocktail of natural resources: sun, wind and water.

Solar parks and wind turbines became part of Portugal's landscape years ago but although around 70% of the electricity generated comes from renewable sources, the country still relies on imported fossil fuels to meet its energy needs.

Cutting down on fossil fuels is seen as a key to meeting a Paris Agreement commitment to curb the global average temperature rise to below 2 Degrees Celsius this century.

As Europe faces soaring power prices due to a global surge in gas prices, Portugal - where nearly 20% of the population struggles to keep homes warm - is not giving up on its "go green" dream and floating solutions could play a part.

Around 18 kilometers (11 miles) off the coast of the northern port city of Viana do Castelo, three behemoth offshore wind turbines, mounted on equally gigantic yellow floating structures, are anchored with chains to the bottom of the Atlantic.

"It is one of the largest offshore floating wind farms in the world," said Jose Pinheiro, project director of WindFloat Atlantic, a consortium which includes France's Engie, Portugal's EDP Renovaveis, Repsol and Principle Power.

Pinheiro sees it as a game-changer, not only for Portugal but for the world.

Installing turbines in deep sea, where winds are strong, allows it to harness more energy than the conventional structures onshore.

Eventually, it will make electricity cheaper and Portugal less dependent on fossil fuels, Pinheiro said at the port from where maintenance crews often travel to the wind towers.

'PATH TOWARDS SUSTAINABILITY'
But challenges persist. Pinheiro did not disclose how much the project cost but building offshore is always expensive.

A study funded by the U.S. Department of Energy said wind energy costs - offshore and onshore - could decline by up to 49% by 2050.

"It (the floating technology) will mature enough to become more cost-effective and that will bring large-scale offshore floating wind farms to our horizon," Pinheiro said.

Offshore wind farms also face opposition from fishing communities as they are not allowed to fish around the platforms or near the underwater cable that connects them to land.

"We are limited to the south by the windmills and to the north by the border" with Spain, veteran fisherman Vasco Presa said in a tiny fishing village near Viana do Castelo. "Of course this affects us."

A two-hour drive from Viana do Castelo, more floating solutions are being put to test.

Portugal's largest utility EDP installed in 2017 a floating photovoltaic solar power plant - a total of 840 solar panels - on the waters of the Alto Rabagao dam. It is now building a bigger similar park on the Alqueva dam in the south.

Overlooking the panels from inside a boat, local EDP director Nuno Guedes said that placing floating solar platforms on dams had huge benefits as they complement hydroelectric generation, reusing existing facilities and avoiding the use of more land.

"When there's more sun we have less water so both resources complement each other," he said. "This will help us on our path towards sustainability and a decarbonized society."