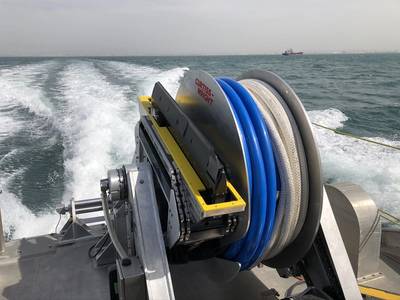 With overall system weight reduced to approx. 40% of the already compact TRAPS, TRAPS-USV allows surface vessels and USVs as small as 12 meters long, to be equipped with powerful, long-range active sonar ASW capability. This enables the USVs to perform ASW operations on the move while conducting independent missions or augmenting manned ASW assets including opportunities for advanced techniques such as bi-static and multi-static operation.

Similar to its “larger brother” TRAPS (with installed or containerized configurations), TRAPS-USV is a Low Frequency (LF) variable-depth-sonar intended for detection, classification, localization, and tracking of submarines in ASW operations. TRAPS' advantage is that its’ projector array is reelable and stows on the winch drum with the receive array and tow cable. This feature eliminates the need for a dedicated active over-boarding system saving, weight, space, complexity and cost. Both TRAPS and TRAPS-USV also have the capability to swap out and exchange active sonar projectors allowing O-level adaptation of the system to different active sonar frequencies in the 2 to 10 kHz range. The containerized version of TRAPS first went to sea onboard Royal Canadian Navy ships in 2019.

In commonality with TRAPS, sonar processing for TRAPS-USV is performed by GeoSpectrum’s sensor-agnostic RecView sonar processing capability which was designed for remote / distributed operation.