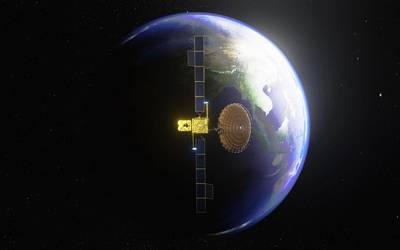 The satellite, the size of a London double-decker bus, with a solar array ‘wingspan’ larger than a Boeing 767, was launched by MHI in Japan in December 2021. Since its launch, it has been moving towards geostationary orbit (GEO) approximately 36,000km (~22,500 miles) above the Earth via its all-electric propulsion system. It has now arrived at its test location over the Atlantic and has begun a thorough and extensive testing program before moving and entering service over the Eastern Indian Ocean in early 2023. Ground stations at Perth and Merredin in Western Australia will support I-6 F1 service.

The satellite will soon be followed by its ‘identical twin’, I-6 F2, which has just completed testing at  Airbus Defence and Space facilities in Toulouse, France. It is due to be launched in Q1 2023 by SpaceX.

“The I-6 satellites will extend Inmarsat’s global leadership in L-band services through ELERA to the 2040s, as well as enhance further our Global Xpress Ka-band network capacity in emerging hotspots," said Peter Hadinger, CTO, Inmarsat. "Offering greater bandwidth and coverage, supporting greater speeds and a greater portfolio of innovative connectivity, Inmarsat’s I-6s also substantially increase the effective capacity of the ELERA network available to our customers. Having double the beams, 50% more spectrum per beam and double the power of the I-4s, the I-6s’ advanced processors match customer demand as and where it is needed in real-time."

The I-6 satellites are backward-compatible with existing terminals.