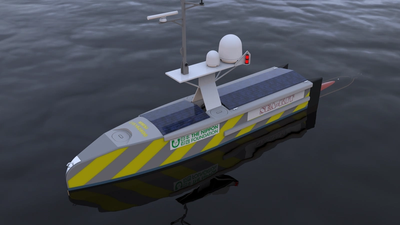 SEA-KIT is a USV that can carry a deployable and retrievable payload of up to 2.5 tons. It is based on the AUV-USV concept, which could lead to more efficient, safer and cost-effective seafloor mapping operations, as well as providing a platform for numerous applications in a wide range of maritime sectors.
The SEA-KIT vessel provides a next generation, long-range, long-endurance ocean capability that does not exist today. It is able to operate without assistance for months at a time and is the first of a new generation of craft that can truly operate independently.
K-MATE is capable of being integrated with almost any vessel via an electrical interface. It provides adaptive waypoint following for survey and AUV operations while accepting sensor data for scene analysis and collision avoidance. K-MATE is an autonomous system designed to follow mission plans, in addition to providing global supervised operations or even direct operator control for complex tasks.
K-MATE is the common autonomous control engine to be used by unmanned and autonomous vessels delivered by Kongsberg Maritime, including the fully electric container feeder YARA Birkeland. It has been developed by the Kongsberg Maritime Subsea Division in Horten, Norway in conjunction with FFI, the Norwegian Defense Research Establishment and is the result of a long and fruitful history of joint development projects, including the HUGIN AUV System.
In addition to the K-MATE autonomy controller solution, SEA-KIT will be equipped with Kongsberg’s Maritime Broadband Radio (MBR) for high bandwidth direct communication to shore, SeaPath 135 with an MRU5+ for heading, attitude and positioning and the AIS300 Automatic Positioning System. KONGSBERG’s HiPAP acoustic positioning and control system will be used to supervise AUV operations.
SEA-KIT’s two-system AUV-USV configuration provides the unique ability to carry a Kongsberg HUGIN AUV. In parallel with these AUV capabilities, SEA-KIT’s hull is designed to have different payloads installed including KONGSBERG’s proven range of multibeam echo sounders such as the EM302. SEA-KIT also has extended endurance options, making it the first autonomous boat capable of trans-ocean survey operations.
SEA-KIT is due to be launched this September. Its first task is to compete in the $7 million Shell Ocean Discovery XPRIZE, a global competition with the aim of advancing deep-sea technologies for autonomous, fast and high-resolution ocean exploration. It will be managed by the GEBCO-NF Alumni Team, led by alumni of The Nippon Foundation/General Bathymetric Chart of the Oceans (GEBCO) Postgraduate Certificate in Ocean Bathymetric Training Program, run at the Centre for Coastal and Ocean Mapping at the University of New Hampshire, U.S. – now in its 13th year. All alumni hold positions in their own countries’ maritime industries. GEBCO is the only organization with a mandate to map the entirety of the world’s ocean floors.
The Nippon Foundation, Japan’s largest private philanthropic foundation with a long history of involvement in maritime issues, has agreed to provide more than $3 million to assist with concept development and the design of new technology to be utilised in the semi-final stage of the competition by the GEBCO-NF Alumni Team. The Chairman of The Nippon Foundation, Yohei Sasakawa, recently launched NF-GEBCO Seabed 2030 – with the challenge to map the world’s ocean floors by the year 2030.
SEA-KIT has been built by Hushcraft in the U.K. The GEBCO-NF Alumni Team will utilise a HUGIN AUV which has been provided by Ocean Floor Geophysics and the data work flow and data processing development to meet the Shell Ocean Discovery XPRIZE requirements is being undertaken with assistance from Teledyne CARIS.
• defence research • geophysics • Kongsberg Maritime
Email

BLUEROC: ROV Control in a Box

A number of ROV operations are expensive due to high cost of equipment and complex operation setup. Depro AS and VideoRay LLC have developed a new…