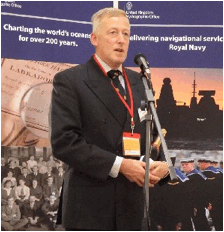 Captain Peter Kortenoeven, Hydrographer of the Royal Netherlands Navy, has been presented with the United Kingdom Hydrographic Office’s (UKHO’s) Alexander Dalrymple Award at a ceremony in London.

The award is dedicated to Alexander Dalrymple who was the first Hydrographer of the Navy when the office was founded in 1795. The award was instituted in 2006 to coincide with the annual World Hydrography Day and is made to an individual who, in the opinion of the Senior Leadership team at UKHO, has shown outstanding dedication and delivered major contribution to world hydrography.

After the ceremony, UKHO Chief Executive Ian Moncrieff CBE commented: “The award has been won by a number of distinguished international hydrographers in the past, from France, Germany, Japan, South Africa and UK, and my colleagues and I are pleased to invite Peter to join this illustrious group.

“Peter was nominated not only for his role leading the Netherlands Hydrographic Office through a period of significant change and challenge, but for his well regarded contribution to the international hydrographic community.  He brings great energy to all his roles that have included Chairmanship of the International Centre- for Electronic Navigation Charts (IC-ENC) and Vice Chairman of the MesoAmerican-Caribbean Sea Hydrographic Commission (MACHC). He is a hugely respected authority throughout the international hydrographic community that comprises 83 different member states”.

Speaking about his achievement, Captain Peter Kortenoeven said, “I am delighted to receive this award for my work in hydrography, particularly Electronic Navigational Charts. I look forward to seeing more and more ships using electronic charts for navigation over the next few years”

The ceremony took place in London at a joint event between UKHO and Department for Environment, Food and Rural Affairs (Defra) working together to celebrate World Hydrography Day 2014. Hydrography concerns much more than just nautical charts and the event explored the varied uses of hydrographic data and their significant contribution to the UK and global economy. The event also included displays that were exhibited in a number of government offices in the capital throughout the week for example in the MOD and BIS/DTI. These showcased the range and value of hydrographic data to other areas such as offshore planning, conservation, and infrastructure as well as navigation.