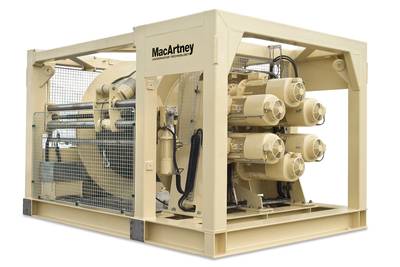 As the search continues for missing Malaysia Airlines flight MH370, which disappeared in March 2014 with 239 passengers and crew aboard, MacArtney informs its MERMAC R40 winch is to be used in the deep-sea search efforts.
The Boeing 777-200ER is believed t have disappeared over the sea between Malaysia and Vietnam during its flight from Kuala Lumpur, Malaysia to Beijing, China. The plane’s transponder stopped transmitting and the passenger jet seemingly disappeared without a trace. Following an intensive search involving planes and ships from 14 countries and a session of careful flight data analysis, it was determined that the plane had diverted south. Since then, resources have been focused on a swathe of the Indian Ocean, about 2,000 kilometers west of Australia - the so-called ‘Seventh Arc’.
In 2015, top ranking government officials from both Australia and China had a meeting and discussed about the search for Malaysia Airlines flight MH370. China offered to help searching for Malaysia Airlines flight MH370 by deploying a search and rescue vessel to search for the missing plane.
A sturdy and advanced vehicle handling system MacArtney won the tender to supply a MERMAC R40 winch for a Benthos deep tow sonar system. The winch is to be installed on board the search and rescue vessel Nan Hai Jiu 102 and the search for flight MH370 is going to be reinitiated in June 2016 by an Australian-based search team.
MacArtney describes it MERMAC R electrically driven winch as a robust and advanced vehicle handling system which safely controls the launch, operation and recovery of ROVs and towed vehicle systems.
Featuring high power and speed, minimal maintenance requirements, a rugged and compact design, active heave compensation and a unique remote diagnostics tool, the MERMAC R series represents cutting-edge winch solutions. The winches are available in standard and custom configurations.
• Australia • Boeing 777 • Indian Ocean

Q&A: Growing Blue Economy Opportunities for US Exporters in Canada

Canada is one of 20 markets to be featured at the Discover Global Markets: The Blue Economy export forum September 20-22…