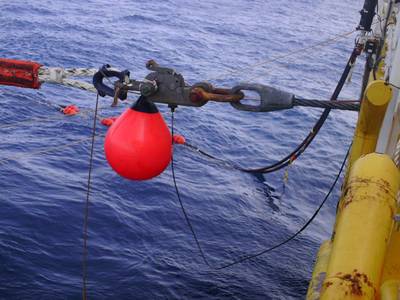 Chevron USA recently used a Sea Catch TR18RAM as an emergency disconnect on the mooring line that secured an ocean going barge to the stern of a drill ship for well test flowback. (Photo courtesy Chevron USA)

McMillan Design is celebrating 20 years of design, manufacturing and sales of the Sea Catch Toggle Release. Since 1994, Sea Catch, a quick release hook designed for the release of lines or objects under load, has gained praise from engineers and users in 14 major industries around the world and is now available in over 68 different models with capacities ranging from .65 ton to 150 tons or larger.

The standard unit is connected via common shackles at each end whereas the "LM" Series is formed with enlarged jaws to receive and release fiber line or wire rope rather than a shackle. Retrieving hooks and off-load hooks have been added to the general product line in recent years.

Sea Catch began as a primitive set net release in Cook Inlet, Alaska and then as a skiff release for purse seiners in Prince William Sound. From there it found multiple release applications in various areas including sea technology, offshore hydrocarbon production/transfer, general maritime operations, drop testing, defense/military, navy/coast guard, movie special effects, and even aerospace. There are now more than 54 dealers worldwide to help facilitate the quick release needs of its customers.

According to McMillan, Sea Catch units sold 20 years ago are still in service, and some units have exceeded 5,000 release cycles and are still in operation.

"Each area of use presents different challenges", said owner/inventor, John McMillan. "It is quite amazing that a simple release device has been found so useful in so many release applications. We use heat-treated, aerospace-grade stainless steel plate. The device combines unique features such as no springs, multi-directional, low friction releasing, and hitch-pin safety lock. The key is the combination of a simple, proven toggle linkage principle - and a lot of thinking about its many jobs. Sea Catch has come a long way from its early start 20 years ago and that is worth celebration."

McMillan Design is still a small, privately owned, multidisciplinary design company located in Gig Harbor, Washington. General production takes place in Auburn, Washington, a short drive from Gig Harbor Proof load testing can be performed locally and is available on a case-by-case basis. Associates are available to assist with engineering services for unique applications or modifications. Sea Catch is computer generated and can be modified to suit most users’ needs.