Kevin Hardy founded Global Ocean Design after a career at the Scripps... 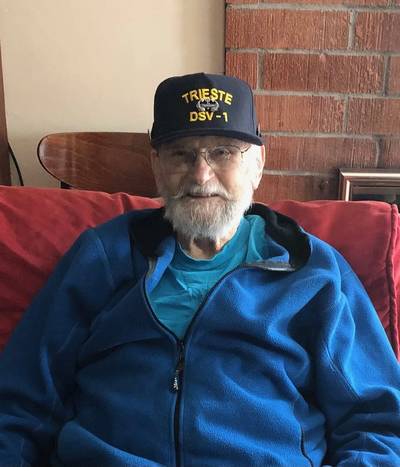 We met in January 1959 when I became the first Officer in Charge of the Navy’s newly acquired Bathyscaph Trieste and John was the first USN enlisted man to be assigned to the project.  We were based at the Naval Electronics Laboratory in San Diego.

Trieste was unique as there were only two deep diving manned submersibles in the world.  The French Navy had the other.  Our team learned about the bathyscaph more by ‘apprenticeship’ than through any sort of formal learning process.  Our ‘teachers’ were the Swiss inventor Jacques Piccard and his Italian mechanic, Giuseppe Buono.  Everything was ‘one-off’, when something was needed we had to design and build it.

This situation was ideal for John, a consummate professional in solving technical problems.  We joked that if we wanted something made, we’d just write a general request on a 3x5 card and slip it under the door of his well-equipped shop.  Then leave him alone, and in due course the finished piece was delivered.

Not only was John technically brilliant, he was a wonderful shipmate.  An ‘old world craftsman’, he paid no attention to clock or calendar when things needed to be done.  From being a diver to boat driver, John was always there.  I never saw him in a bad mood even during the most trying days as we tested Trieste prior to our deepest dive in 1960.  His upbeat personality, sense of humor and unmatched story telling abilities were great morale boosters for the whole team.

His skills as a problem solver reached new heights when a serious failure with our pressure hull threatened to end the program before our dive into Challenger Deep.  John worked out a brilliant field fix and executed it.  While it was not ‘good as new’ it was quite safe for resuming our dive program.

After the fix Jacques Piccard and I made two more dives, one to 24,000 and the other to 35,912 feet.  With the latter being to the deepest place in the World Ocean.  Literally, we bet our lives on John’s work.

We continued to work together with Trieste for nearly three more years. There are many more stories to be told about those days but no room for them here...

I was honored to serve with Master Chief Petty Officer E. John Michel, shipmate and friend.  Fair winds and seas as you embark on your last sea duty…

John Michel was born in Brooklyn, New York, July 25, 1933 to German immigrant parents.  He learned shop skills from his father and many “uncles” in their close-knit neighborhood.  He attended a technical high school to hone his machinist skills.  Working in New York City machine shops during and following high school, he learned to manage them: the men, machines, materials, and orders.  That served him well after he enlisted in the US Navy during the Korean War.

He ran the machine shop of the USS Prairie (AD-15), a Dixie-class destroyer tender.  On one of John’s deployments, the Prairie circumnavigated the globe.  In his new assignment with Project Nekton, he recalled machinery on the Prairie that he was able to acquire to repair the Trieste pressure hull misalignment Walsh spoke of.  As a result of solving deep sea mission challenges, John and the USN received a number of patents for his inventions. While in Project Nekton, he attended and graduated from the U.S. Navy Divers School. He had a few close encounters while SCUBA diving to support Trieste.  On 24 June 1965, John descended to 3,500-ft (583 fathoms) in bathyscaph Trieste II with then LCDR James B. Mooney, Jr., whom John called “a prince of a man.”

John was proud of his German heritage, and spoke the language fluently.  When Professor Auguste Piccard, Swiss inventor of the Trieste, came to visit the boat and crew in San Diego, he could speak German, French and Italian, but not English. John became his translator, and accompanied him everywhere as he toured the Point Loma Submarine Base.  Auguste was impressed with John’s language skills, good nature, and technical knowledge of the bathyscaph.

Those who knew John fondly recall his mischievous chuckle when telling one of his many stories.  He was an elite shell collector and passionate student of the topic.  John passed peacefully surrounded by family and friends on 14 December 2022.  John is survived by his wife, Nola, son, Mark, his wife, Rebecca, granddaughter, Rachel, daughter-in-law, Marilyn, and granddaughters Kristin and Megan.  He is predeceased by his youngest son, Neil.

John served as an inspiration to younger crew: demonstrating a commitment to high standards, the willingness to accept extraordinary challenges, and core belief he had the right stuff to solve the most seemingly complex problems, then move them into the “done” column.

In lieu of flowers, John’s family requests donations be made to the U.S. Navy Divers Memorial at Miramar National Cemetery, San Diego.