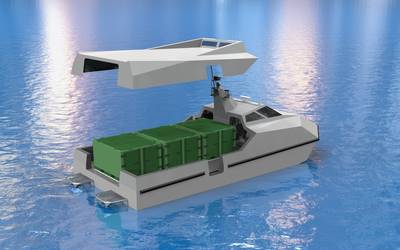 The company says that its Mistral USV is more than just an Intelligence, Surveillance and Reconnaissance (ISR) sentry, it’s a modular unmanned “naval truck” designed specifically for hauling and towing large payloads with a simple, user-friendly control interface.

The Mistral’s extra wide cargo bay area is designed to carry large modular sensor packages, passengers and/or equipment on standard 463L pallets or ISU60 containers. The USV can be operated as a manned or unmanned craft and is designed for landing in a well deck of a larger mothership without the need of a trailer.

Bill Burns, Executive Director at MSHIPCO , believes that “the simple-to-use Mistral USV will accelerate adoption of unmanned technologies by the marine industry for a wide range of new military, commercial and even recreational applications.”

MSHIPCO, LLC, developer of the Stiletto Maritime Platform , adds that it is quickly becoming an industry leader for integrating unmanned systems into marine platforms. The MSHIPCO team includes former military operators and engineers with extensive "hands-on" experience, as well as industry specialists in the areas of design, research, testing and operations.

The MSHIPCO team will be participating in the AUVSI's Unmanned Systems 2013 Conference (August 12-15, 2013) in Washington DC.