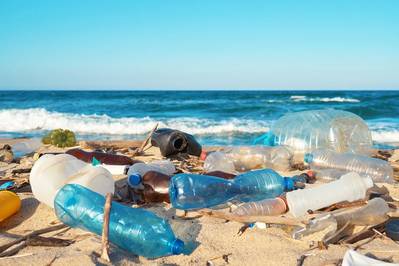 The European Parliament on Wednesday agreed on new measures to tackle marine litter coming from single-use plastic products most often found on European beaches, as well as abandoned fishing gear and oxo-degradable plastics.

The Single-Use Plastics Directive, proposed by the European Commission and adopted by the European Parliament this week, places a ban on selected single-use products made of plastic for which alternatives exist on the market, such as cotton bud sticks, cutlery, plates, straws, stirrers, sticks for balloons, as well as cups, food and beverage containers made of expanded polystyrene, and on all products made of oxo-degradable plastic. Also included are measures to reduce consumption of plastic food containers and beverage cups and specific marking and labeling of certain products.

Part of the EU Plastics Strategy, the new rules would also extended producer responsibility schemes covering the cost to clean-up litter, applied to products such as tobacco filters and fishing gear. The proposed directive sets a 90% separate collection target for plastic bottles by 2029 (77% by 2025) and the introduction of design requirements to connect caps to bottles, as well as target to incorporate 25% of recycled plastic in PET bottles as from 2025 and 30% in all plastic bottles as from 2030.

"We have taken an important step to reduce littering and plastic pollution in our oceans and seas," said First Vice-President Frans Timmermans, responsible for sustainable development. "We got this, we can do this. Europe is setting new and ambitious standards, paving the way for the rest of the world."

The directive follows a similar approach to the 2015 Plastic Bags Directive, which brought about a rapid shift in consumer behavior.

According to the European Commission, when implemented, the new measures will bring about environmental and economic benefits that go beyond a cleaner environment. The rules would avoid the emission of 3.4 million tons of CO2 equivalent, avoid environmental damages which would cost the equivalent of €22 billion by 2030, and save consumers a projected €6.5 billion, it said.

Vice-President Jyrki Katainen, responsible for jobs, growth, investment and competitiveness, added, "Once implemented, the new rules will not only prevent plastic pollution, but also make the European Union the world leader in a more sustainable plastic policy. The European Parliament has played an essential role in laying the foundation for this transformation and in giving a chance to the industry to innovate, thus driving forward our circular economy."

Commissioner for environment, maritime affairs and fisheries, Karmenu Vella, said, "We should all be very proud of these new rules because they tackle marine plastic pollution at its source - one of the most called for and supported EU initiatives among European citizens. After the favorable vote by the Parliament today, our main task will be to ensure that these ambitious measures are quickly implemented in practice, which will be common work for public authorities, producers and consumers alike."

Following this approval by the European Parliament, the Council of Ministers will finalize the formal adoption. This endorsement will be followed by the publication of the texts in the Official Journal of the Union. The Member States will then have two years to transpose the legislation into their national law.

NASA and OceanGate enter into an agreement to collaborate in the development, manufacturing and testing of new carbon fiber pressure vessels.