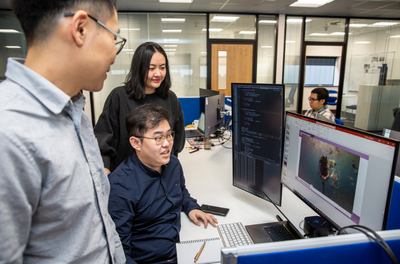 Researchers huddle around a computer at the National Subsea Centre. Credit: RGU

The National Subsea Centre (NSC), a center of excellence for subsea research and technology development, has been officially opened today in Dyce, Aberdeen.

The multi-million-pound center has been developed through a partnership between Robert Gordon University (RGU) and Net Zero Technology Centre (NZTC), as part of the Aberdeen City Region Deal (ACRD).

Its goal is to provide advanced research to accelerate the transition to net zero, and it focuses on three strategic research program. These are Transparent Ocean, Integrated Energy and Marine Operations.

According to the statement marking the center's opening, each program is delivered through interdisciplinary research projects in the fields of subsea engineering, artificial intelligence, data science, and integrated energy.

"The center explores the new technology needed by the energy industry to meet challenges of reduced emissions from operations, cost-effective and resilient power grids and the need to develop a highly skilled digital workforce," the statement reads.

The NSC is currently working with NZTC on a several projects, including the ‘SeaSense’ project which will develop technology that allows remotely operated vehicles (ROV) to function in harsh, visually compromised environments.

The two centers are also collaborating on the NZTC’s ‘Data for Net Zero (D4NZ)’ project, which they say will deliver the world’s first "Smart Energy Basin" by using an integrated suite of data science, visualization, and modeling tools.