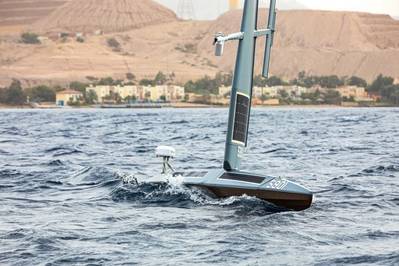 NAVCENT commenced exercise Digital Horizon while launching a Saildrone Explorer USV into the water for the first time from the Royal Jordanian naval base in Aqaba, Jordan. Last month, U.S. and Jordanian naval leaders announced the base would become a joint hub for Saildrone operations in the Red Sea.

“These are exciting times for Task Force 59 as we team with the Royal Jordanian Navy to establish our hub for Red Sea operations in Aqaba and deploy some of our new maritime robotics,” said Capt. Michael Brasseur, commander of NAVCENT’s new task force for unmanned systems and artificial intelligence.

The Saildrone Explorer is a 23-foot-long, 16-foot-tall USV reliant on wind power for propulsion. The vessel houses a package of sensors powered through solar energy for building a shared picture of the surrounding seas.

After establishing Task Force 59 in September, NAVCENT is in the early stages of integrating unmanned systems and artificial intelligence into the U.S. 5th Fleet operational environment.

In October, the task force integrated and evaluated new MANTAS T-12 USVs alongside crewed ships in the Arabian Gulf during exercise New Horizon. On Dec. 4, the task force initiated at-sea operational tests for a MANTAS T-38 USV off the coast of Bahrain.