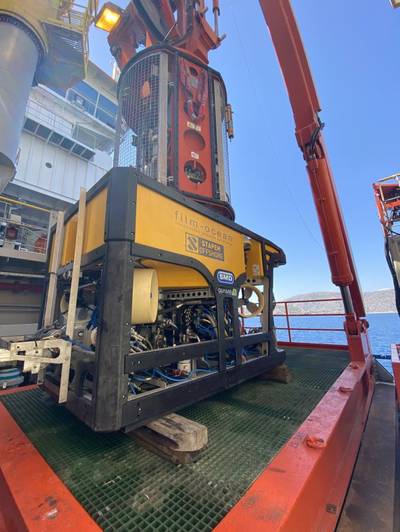 "This significant investment is part of Film-Ocean's fleet expansion strategy, which has seen four ROV systems added to the fleet over the past 12 months," Film-Ocean said.

Working at depths of up to 3000m Film-Ocean's Quasar 150HP Workclass ROV, a medium-sized high-power ROV, can be used for surveying, IRM, drill support, and construction tasks.

Scott Jenney, Film-Ocean CEO reported: "The additional Quasar ROV system is the latest in a series of planned developments within the business and an excellent addition to the fleet. We continue to see a high level of enquiries for this type of ROV system and this investment allows us to provide the additional capacity that our customers require.”

Subsea robots can be great for environmental studies and search-and-rescue missions and, but eventually, they must return…

Rowe Technologies designs and manufactures high performance acoustic Doppler products and systems for navigation (DVLs) and oceanographic applications (ADCPs) for use in oceans, lakes, and rivers. We have a wide variety of products for use in real-time and self…