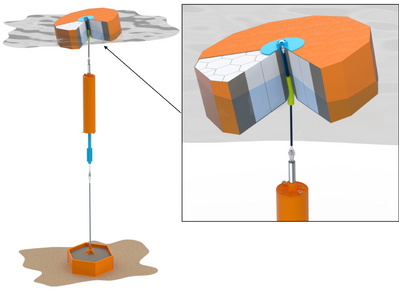 According to the company, the buoy system is being developed using high-strength concrete with low environmental footprint and excellent durability.

"The solution allows for large-scale production and results in a buoy with a weight similar to a conventional steel hull, but at 1/4 of the cost and 1/3 of the CO2 footprint," Ocean Harvesting said.

Describing the process, Ocean Harvesting said: "Highly flowable concrete is poured into a mold with void fillers, forming the concrete shell and the internal honeycomb structure, one of the strongest structures in nature. Most of the raw materials will be sourced locally at the installation site, where the buoy is cast in a process common in civil engineering. The buoy will be towed or shipped to the installation site and linked to the InfinityWEC PTO system with a mooring rope, which enables quick and diverless attachment and detachment of the buoy from the PTO system during installation and maintenance operations."

Ocean Harvesting said that the Research Institutes of Sweden department for Infrastructure and Concrete Technology has developed a unique high-performance concrete mix for the buoy, as part of the joint industry project WECHull.

"To facilitate a thin-walled, lightweight structure and easy, rapid manufacturing, alternative reinforcement measures were investigated, evaluating the use of fibres of different types (carbon, aramid, glass, steel and biomass), as well as polymer reinforcement with carbon-textile grids. By using recycled aggregates and replacing more than 50% of the cement content, InfinityWEC’s buoy is aligned with the European Circular Economy Action Plan," Ocean Harvesting

According to Ocean Harvesting, its InfinityWEC is a point absorber type wave energy converter, featuring technology that enables maximum power output from every wave.

According to the developer the technology is engineered for sustainable large-scale production and effective logistics, durable, and promises Low Levelized Cost of Energy (LCoE).

Describing the durability of the InfinityWEC, Ocean Harvesting says: "A unique survival function holds the buoy submerged through the crest of large waves, protecting the system from excessive load and enabling power to be also produced in the most severe wave conditions.

"The excellent performance and reliability, combined with a modular design where all critical parts are easily constructed, transported, installed and maintained, make InfinityWEC a very competitive solution for the future global energy market. The market for InfinityWEC ranges from utility-scale wave farms to off-grid power supply, for island communities, green hydrogen production and other offshore industrial installations such as oil & gas and aquaculture," the company says, describing the WEC.

The next development stage for Ocean Harvesting is a sea trial of InfinityWEC at scale 1:3, a project planned to start in November 2022. The sea trial will demonstrate the InfinityWEC technology and its control system, and their performance in the real sea environment.

"This is a critical step towards the final validation stage of the system at full scale and the commercialization of the technology," Ocean Harvesting said.

Acteon, an offshore services and equipment provider, on Wednesday announced a new structure that it said would further accelerate…