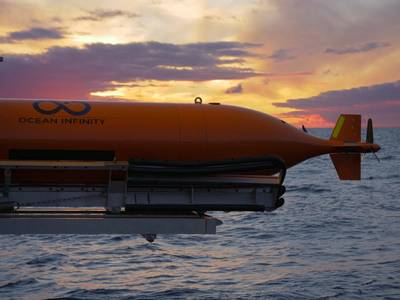 Marine robotics and offshore survey specialist Ocean Infinity, has completed a survey contract with the French oil major Total, in Angola, achieving what it describes as a first such survey in the industry.

"The project was the first time that geophysical, geotechnical, and seismic data has been gathered at the same time," Ocean Infinity said.

Ocean Infinity used its Autonomous Underwater Vehicles (AUVs) with geotechnical and seismic equipment based from one surface vessel.

"The successful completion of this project, which was all done from one vessel and on a single cruise out to the project site, is a major breakthrough in maximizing efficiency on sub-sea survey operations," Ocean Infinity said.

The 28-day project was carried out from the host vessel ‘Normand Frontier’ using Ocean Infinity’s technology, during which the company conducted 2D Ultra High-Resolution Seismic surveys and Seabed soil Sampling in Block 32 and Block 17 in deep waters offshore Angola.

Josh Broussard, Ocean Infinity’s CTO, said, “We are very pleased to have completed this survey project for Total E&P in Angola, which has been a resounding success and has evidenced significant progress in the efficiency of collecting data. Our technology continues to be at the forefront of innovation and we are delighted to have demonstrated this by gathering three sets of high-quality data through multiple AUVs deployed simultaneously with geotechnical and seismic equipment, from a single vessel, a first for the industry."

Worth reminding, the U.S. oil major ExxonMobil last week contracted Ocean Infinity for a similar survey project over the Stabroek Block in Guyana where the oil company has so far struck no less than 16 oil discoveries.

Under the contract, Ocean Infinity will deploy high-resolution autonomous underwater vehicles (AUV) to gather geophysical and geotechnical data within the offshore block.

Ocean Infinity will simultaneously deploy a fleet of AUVs in water depths of between 70 meters and 2,150 meters over an area of approximately 3,100 square kilometers.