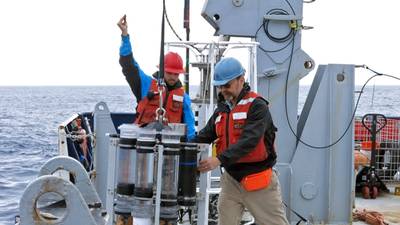 While scientists have long known the essential role that the ocean plays in capturing atmospheric carbon, a new study from Woods Hole Oceanographic Institution (WHOI) shows the efficiency of this natural pump has been underestimated.

The ocean’s “biological pump” is a critical part of the global carbon cycle and relies on phytoplankton, single-cell organisms that use photosynthesis to turn light into energy—consuming carbon dioxide and releasing oxygen in the process. When phytoplankton die or are eaten by zooplankton, carbon-rich fragments sink into the ocean, then consumed by other creatures or buried in sediments. In a paper published on April 6, 2020 in

Proceedings of the National Academy of Science, WHOI geochemist Ken Buesseler and colleagues showed that the depth of euphotic, or sunlit, zones vary throughout the ocean. This matters since the phytoplankton’s ability to take up carbon depends on the amount of sunlight that is able to penetrate the ocean’s upper layer.

By using chlorophyll sensors, which indicate the presence of phytoplankton, to assess the depth of the euphotic region, it was found that about twice as much carbon sinks into the ocean per year than previously thought.

Buesseler, a principal investigator with WHOI’s Ocean Twilight Zone Project that focuses on the important mid-ocean region, explains this new information holds implications for not just today’s ocean, but that of the future, too. “Is the amount of carbon sinking in the ocean going up or down? That number affects the climate of the world we live in,” he added.