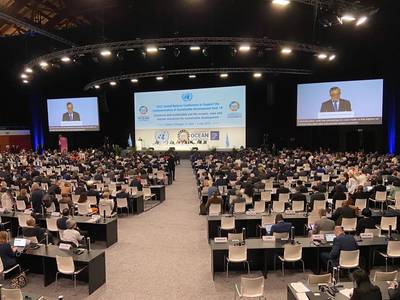 When COVID-19 lockdowns shut down much of the world, images of animals roaming city streets and dipping air pollution levels led some to believe the pandemic might mark a turning point for global action on climate change.

But those hopes are fading, the United Nations Special Envoy for the Ocean said on Monday, as a conference to assess progress in protecting marine life on the high seas got under way in Lisbon.

As COVID restrictions were lifted, nature's "green and blue rebound" turned out to be just a temporary phenomenon, envoy Peter Thomson told Reuters.

"We are back to our old ways of jamming into airplanes and cluttering our streets with plastic pollution... Let's face it."

He did however remain confident that U.N. member states would reach a consensus this year on a treaty to protect the oceans from exploitation after failing to agree on it in March.

Thomson said he also hoped the U.N. Ocean Conference, bringing together around 7,000 people from over 100 countries, would promote debate about how to make tourism more sustainable, decarbonize the polluting shipping industry and find alternatives to plastic.

Eleven million tonnes of plastic - which Thomson called the planet's plague - end up in the ocean each year. That could triple by 2040 unless production and use of throwaway containers are reduced, scientific studies show.

Work on a legally-binding plastic pollution treaty should be finalized by the end of 2024, Thomson said.

Nearby, on one of the city's beaches, protesters from climate activist group Ocean Rebellion staged a display dressed as mermaids ensnared in plastic and fishing nets.

"Since I was born, 50% of ocean life has died, and ... if the people who have the power to act now don't, then that's going to continue," activist Sophie Miller told Reuters TV.

Thomson said new challenges were arising such as deep-sea mining, which involves sucking up potato-sized rocks containing cobalt, nickel and other metals from the Pacific Ocean floor. He believes regulations to counter that will appear soon.

Greenpeace has warned that, without a working treaty, it will be "almost impossible" to protect 30% of the oceans by 2030, the minimum scientists agree is needed to allow them to recover.

"I'm very sure we are going to get there," Thomson said.