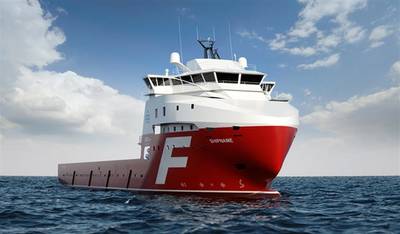 Farstad Shipping ASA has been awarded charter contracts with a value of about US$ 58-million.

The contracts awarded to Farstad are as follows:

Statoil has awarded contracts to PSV Far Spica (2013, PSV 08 CD, 4,000 DWT) and PSV Far Scotsman (2012, PSV 08 CD, 4,000 DWT) to support the Statoil drilling campaign on the coast of East Africa. Commencement is expected to take place in April 2013. The duration of the contracts will be approx. 9 months, with a further 9 month option. Both vessels will leave the North Sea during the month of March.

Perenco Petroleo e Gas do Brasil has awarded a 12 month contract with a 6 month option to AHTS Far Sagaris (2009, UT 731 CD, 24,000 BHP) to support the Ocean Star drilling campaign in Brazil. Commencement of the contract is expected to take place during 1st quarter 2013.

Fugro RUE AS in Norway has awarded the IMS vessel Far Saga (2001, UT 745 L) a 6 month contract with options thereafter. Commencement is set to mid-February. The contract includes ROV support operations and other subsea related activities in the North Sea.

Total value of the contracts, excluding options, is approx. NOK 320 mill. after deduction of local taxes.

The above contracts give Farstad the opportunity to mobilise three PSV out of the North Sea which will have a positive impact on the market balance in the region. Farstad Shipping has recently also mobilised AHTS Far Sabre from the North Sea to Australia.

As companies race to expand renewable energy and the batteries to store it, finding sufficient amounts of rare earth metals…