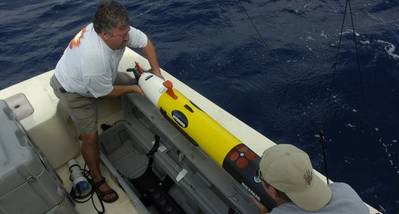 In 2003, NOAA (with support from the Office of Naval Research), partnered to uncover the “secrets” of the USS Alligator—the U.S. Navy’s first submarine, which was considered “lost” at sea since April 1863. While the vessel represented a tremendous leap in naval engineering, both its design innovation and fate are still considered a “mystery.” The NOAA/ONR partnership was formed in the hopes of uncovering the answers to these questions, and attempts are still being made. The initial search expedition began with just a few key clues, specifically a letter from J.D. Winchester, the acting master of the USS Sumpter, which explains how (while being towed from Washington DC to Charleston, SC) the Alligator came loose during a storm in 1863, forcing the Sumpter crew to cut the vessel loose off Cape Hatteras, NC.
With this in mind, the survey began in “The Graveyard of the Atlantic,” in Ocracoke, NC, (off Cape Hatteras). Using details provided in Winchester’s letter, (along with available information about the Alligator and an analysis of the oceanographic and meteorological conditions that may have existed at the time of the Alligator’s loss) the USNA-NOAA-ONR research team developed a rough estimation of where the green, 47-foot-long submarine may have come to rest.
While the odds of finding the Alligator are said to be improving, both NOAA and the ONR, returned late last year to the “Graveyard of the Atlantic” to revive the search, and have yet to locate any of the vessel’s remains.
Marine Technology Reporter has been commissioned to publish the Official “Oceanology International 50th Anniversary Edition” which will distribute with the MARCH 2020 edition of MTR. For information on advertising in this edition, contact Rob Howard @ howard@marinelink.com, t: +1 561-732-4368; or Mike Kozlowski @ kozlowski@marinelink.com, +1-561-733-2477.
• Cape Hatteras • Mike Kozlowski • National Oceanic and Atmospheric Administration
Email