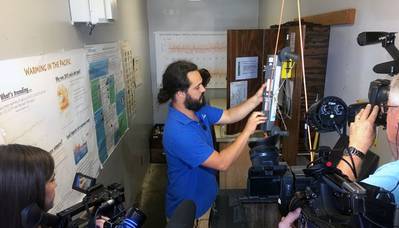 During the summer of 2018, a research team at Scripps Institution of Oceanography at the University of California San Diego logged in the warmest sea surface temperature at the Ellen Browning Scripps Memorial Pier. According to Scripps, the logged temperature was 78.6 degrees Fahrenheit—the highest since recording began in August 1916—and the same year Scripps researchers began sea-surface temperature and salinity readings at the pier.

In 1925, Scripps began taking seafloor water temperature measurements, and the daily collection is still completed by hand and maintained by the institution’s Shore Stations program. With nine stations on the California coast that measure seawater temperature and salinity, the program also keeps continuous automated measurements of temperature, salinity, chlorophyll and pressure as part of the Southern California Coastal Ocean Observing System.

According to Scripps researchers, the record warmth is in tandem with high temperature records also set on land, as well as the extreme weather that was experienced in 2018. It was also noted that these higher temperature records will be easier to break as a boost from new weather patterns have added 1 degree Celsius to ocean temperatures over the past 100 years.

As trade exhibitions and conferences globally continue to cancel or reschedule due to the COVID-19 fears, the Oceanology…