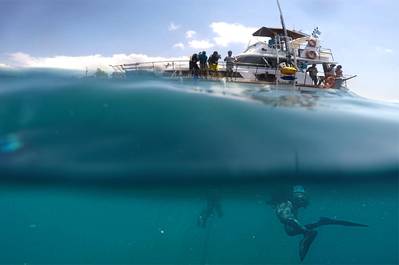 In 2017, UC San Diego launched the Scripps Center for Marine Archaeology (SCMA). Co-led by Scripps Oceanography and Department of Anthropology, the new center was designed to investigate the relationship between human societies and marine environments. The center was co-founded by Scripps geophysicist Walter Munk and former Institute of Geophysics and Planetary Physics Green Fellow Damien Leloup, who started his research career onboard the vessels Calypso and Alcyone, while working alongside Jacque Cousteau. As part of a funding effort, Munk and Leloup managed to raise more than $400,000 in see donations, and thus secured approval to commence the center in September 2015. Subsequent to what was completed by the duo, Scripps oceanographer John Hildebrand and Thomas Levy, a Division of Social Sciences anthropologist, were named the center’s first leaders. The Center also includes various collaborators and scientists from several areas, such as oceanography, marine technology, climate sciences, environmental sciences, anthropology and archaeology.

Marine Technology Reporter has been commissioned to publish the Official “Oceanology International 50th Anniversary Edition” which will distribute with the MARCH 2020 edition of MTR. For information on advertising in this edition, contact Rob Howard @ howard@marinelink.com, t: +1 561-732-4368; or Mike Kozlowski @ kozlowski@marinelink.com, +1-561-733-2477.
• geophysics • marine technology • Mike Kozlowski
Email

On December 23, an urgent inquiry was received from a Phoenix client requesting a proposal and timeline for a dive team to…