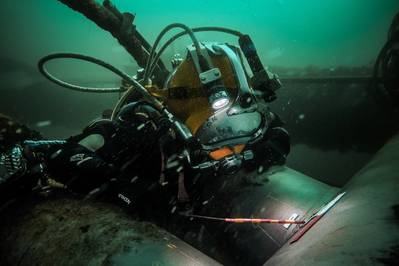 The company said its commercial growth from bases in Aberdeen, the Netherlands and the Middle East has been spurred by the completion of more than 1,500 vessel days throughout the year, reinforced by an increase in personnel numbers.

In the North Sea, the firm continued ongoing work through long-term frame agreements for several major oil and gas international operators and the securing of contract wins with three new clients. Managed and supported by N-Sea’s inspection, repair and maintenance (IRM) team, the projects comprised air diving IRM, in addition to light construction requirements, assisted by the charter of six diving support vessels and N-Sea’s three daughtercrafts. As a result, the Aberdeen division has appointed a number of additional personnel to its workforce.

N-Sea’s Dubai office has extended its services into emerging markets, having secured work in Libya with a tier 1 contractor and currently working on saturation diving and air diving scopes in Egypt. Throughout 2019, the Middle East base has achieved a 500% growth and attained $20 million in contract wins, making it a record year for the region. As a direct result, N-Sea has increased its Dubai-based personnel from two employees to 15, with an offshore team in excess of 125 and additional internal support from UK colleagues.

N-Sea’s longstanding track record of survey capabilities also continued to grow during 2019, with the completion of a €2.7 million survey and UXO identification project for a green energy giant, deployed via the company’s survey operations team. In the latter part of the year, N-Sea further developed and formalized its UXO services, via investment in its existing joint venture with BODAC.

N-Sea CEO, Arno van Poppel said, “Investments in cable repair, storage and PLIB solutions, as well as scour protection, will allow the company to further consolidate its presence within current marketplaces, whilst expanding into new regions.”