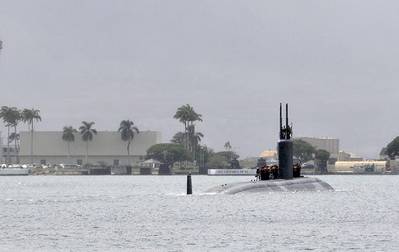 Family and friends bid farewell to the crew on the submarine piers at Joint Base Pearl Harbor-Hickam as the Los Angeles-class fast-attack submarine USS Santa Fe (SSN 763) departed July 29, for a deployment to the Western Pacific region.

Santa Fe's Commanding Officer, Cmdr. Timothy Poe said the submarine and her crew are excited to get underway to the Western Pacific and train on numerous mission areas as well as participate in theater security cooperation engagements.

"Santa Fe is in excellent condition. Pearl Harbor Naval Shipyard personnel have worked diligently to ensure the ship is in even better condition than when she was commissioned," Poe said.

Of the 140 Sailors who will be deploying, 80 of the Sailors will be on their first deployment, Poe added.

Santa Fe's goal is to build the next generation of warfighters, Poe said. The Sailors will qualify in submarines and gain the critical experience and knowledge to propel the submarine force for many years.

Poe added that the crew will serve with honor and commitment that will reflect greatly on the U.S. Navy and her namesake city of Santa Fe, N.M.

Santa Fe is the second ship to be named in honor of the capital city of New Mexico.