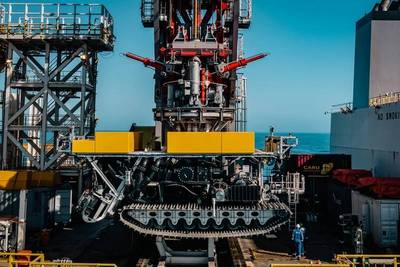 TMC, a company gearing up for commercial metallic nodule collection from the seabed, on Monday announced a committed PIPE financing which is expected to result in US$30.4 million of gross proceeds (approximately $30M net proceeds) through the issuance of approximately 38.0 million common shares.

A majority of the committed funds are from existing TMC shareholders and insiders, including Allseas, ERAS Capital (the family office of TMC Director Andrei Karkar), SAF Group Managing Partner and entrepreneur Brian Paes-Braga, Front End Chairman & CEO Majid Alghaslan, and TMC Chairman & CEO Gerard Barron (who purchased common shares at $0.9645 per share based on the consolidated closing bid price of the common shares on August 11, 2022) and his family.

In total, approximately 70% of the commitments came from existing TMC shareholders and insiders.

"The company believes that the full proceeds from this transaction expected this quarter plus existing cash will be sufficient to fund operations for at least the next twelve months, past the July 2023 date targeted by the International Seabed Authority (ISA) as the date for the final adoption of the exploitation regulations for the industry," TMC said.

“I appreciate the ongoing support from our existing shareholders and welcome new shareholders to TMC,” said Gerard Barron, CEO and Chairman of TMC. “While we continue to see strong tailwinds in critical mineral demand and prices as well as increased efforts by countries and companies to shore up supply chains for EV battery metals, our pre-production company is not immune to inflation, particularly in our offshore costs. We believe this infusion of capital helps to ensure that we can continue to hit our milestones leading up to the expected submission of our NORI-D exploitation application to the ISA.”

Last month, TMC announced that its Australian subsidiary, The Metals Company Australia Pty Ltd., had entered into a research funding agreement with a consortium of institutions led by Australia’s Commonwealth Scientific Industrial Research Organisation (CSIRO) to create a framework for the development of an ecosystem-based environmental management and monitoring plan (EMMP). Earlier this year the Company and its strategic partner, Allseas, announced the successful wet-test commissioning of the pilot nodule collection system — including the nodule riser and collector vehicle — in the Atlantic Ocean.