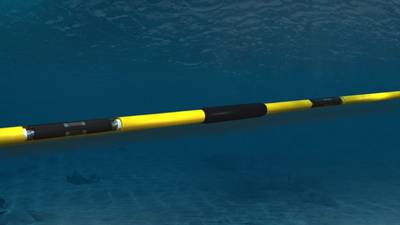 CGG announced that Sercel has sold one of its new Sentinel HR high-resolution solid streamers to the Alfred Wegener Institute (AWI), a German research foundation specializing in polar and marine research in the Arctic and Antarctic.

AWI will use the Sentinel HR on research projects it is conducting to record critical data about the relationship between geological activity and ecosystems in order to gain a better understanding of the Earth’s system.
Launched in 2017, Sentinel HR is the latest member of Sercel’s Sentinel solid streamer family. With a close channel separation of 3.125 m, Sentinel HR is designed for shallow target applications and high-resolution 3D surveys and delivers an industry-best hydrophone performance. Driven by Sercel’s new-generation Seal 428 marine seismic recorder, up to 6 km of Sentinel HR can be deployed with full data and power redundancy for non-stop acquisition.
AWI has also added the combination of Sercel’s SeaPro Nav integrated high-end navigation system and QuietSea™ Passive Acoustic Monitoring (PAM) system to its marine seismic equipment portfolio to optimize marine mammal detection during seismic acquisition. SeaProNav provides the most accurate real-time positioning for all types of marine seismic surveys while QuietSea complies with international marine mammal monitoring regulations to offer the most advanced detection tool in the industry.
Pascal Rouiller, Sercel CEO, said, “We are delighted that AWI has again selected Sercel systems to conduct its next oceanographic surveys in polar regions. By adding the Sentinel HR to its portfolio of Sercel marine seismic acquisition equipment, which includes the Sentinel, Seal 428, SeaPro Nav and QuietSea, AWI will benefit from highly detailed images of the shallow sediment layers in the most challenging environments.”
• Alfred Wegener Institute • Antarctic • Pascal Rouiller