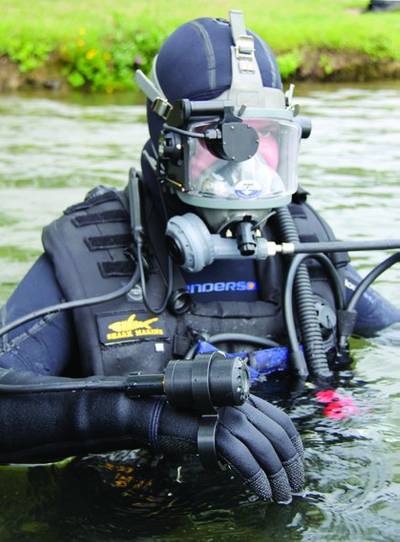 The Shark Eye was developed by Shark Marine in order to solve a common problem faced by many EOD / SAR teams, poor visibility.

The Shark Eye allows divers to see objects and conduct detailed visual inspections at arm’s reach even in turbid/ dark water, eliminating the need for the diver to press their mask against what could be explosive or hazardous material. The Shark Eye consists of a head mounted display, battery pack and a camera with hand held mount. The Shark Eye allows divers to perform visual inspections in areas that are hard / dangerous to access without having to place their entire bodies inside, and can also allow divers to see behind their back to prevent entanglement issues.

The Shark Eye comes standard with Shark Marine’s IR camera. Other camera models such as colour and extreme low light are also available.

Shark Marine developed the Shark Eye after speaking with the Savannah Police department Dive Team/ Bomb Squad about the problems and limitations they normally work with, and the type of information they need to collect on-site. Once the prototype was complete it was sent to the Savannah Police department to evaluate. The following comments were sent back to Shark Marine: “The camera is an awesome breakthrough piece of equipment for any public safety diver and underwater EOD team to have in their equipment arsenal.”