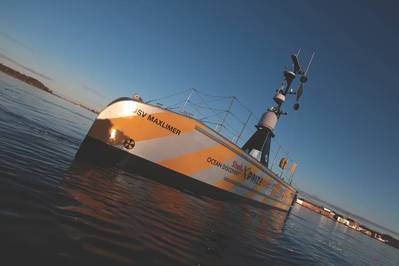 The GEBCO NF- Alumni Team was announced as the $4 million grand prize winner of the Shell Ocean Discovery XPRIZE, a three-year global competition that challenged teams to advance deep sea technologies for autonomous and unmanned, fast and high-resolution ocean exploration.

The team's winning concept includes the use of a unique unmanned surface vessel (USV) / autonomous underwater vessel (AUV) and associated combination of communications hardware and software to process and transmit data remotely.

The SEA-KIT USV, Maxlimer, built by Hushcraft in the UK, has a unique ability to launch and recover a KONGSBERG HUGIN AUV, and track it accurately on the surface during subsea survey operations. The autonomous navigation and AUV tracking capabilities of the USV are possible through the integration of the KONGSBERG & Hushcraft custom developed automation and software configuration in conjunction with KONGSBERG’s K-MATE common autonomous control engine.

The HUGIN AUV, Chercheur, deployed by the SEA-KIT USV is owned and operated by Ocean Floor Geophysics (OFG). It is one of the best equipped survey and pipeline inspection AUVs in the world, with HISAS interferometric synthetic aperture sonar, multibeam, sub-bottom profiler, OFG Self-Compensating Magnetometer, water chemistry sensors, acoustic modem, and a state-of-the-art positioning system.

The GEBCO-NF Alumni Team’s data processing solution utilizes Teledyne Caris components and the development work to meet the requirements of the Shell Ocean Discovery XPRIZE has been undertaken with assistance from Teledyne CARIS.

The team’s entry into the competition was funded by The Nippon Foundation, a Japanese private non-profit organisation, and the prize money will be reinvested by foundation into the development of future ocean mapping initiatives.

The team venture was based at the Center for Coastal and Ocean Mapping / Joint Hydrographic Center (CCOM/JHC) at UNH. The Alumni worked closely with partners including the Sasakawa Peace Foundation, Hushcraft Ltd., Ocean Floor Geophysics Inc., Earth Analytic, Teledyne CARIS, Raitt Orr and Associates, ShipOwners, and OmniAccess, as well as equipment supplier Kongsberg Maritime AS, to develop and advance the team concept created especially for the Shell Ocean Discovery XPRIZE.

Dr Rochelle Wigley, Project Coordinator for the team, thanked the XPRIZE judges for recognizing the tireless work and ingenuity of the team members and all others who had contributed to the entry.

“We’re all absolutely overjoyed”, said Dr Wigley, speaking after the announcement was made. “Getting to this point has been a truly international effort. Our diverse nationalities, backgrounds, and specialities have been our greatest asset, and are the reason we made it this far.

“Our team’s success could not have been achieved without the partnership and support of The Nippon Foundation. We are the result of their investment in training a new generation of ocean mappers at the University of New Hampshire for the last fifteen years.

“The Shell Ocean Discovery XPRIZE challenged us to develop effective, efficient, and better ways of mapping the seafloor. We chose to meet the challenge of XPRIZE by forming a team that transcended borders, on land and at sea. We are privileged to have competed against so many excellent teams, and we have all succeeded in the challenge. We can’t wait to see what the future holds for us and for our technology, all of which can only further the ambition of The Nippon Foundation-GEBCO Seabed 2030 Project to map the entirety of the world’s oceans.”

Dr Yulia Zarayskaya said she believed that “the most important and unique aspect of our solution is the approach that we took. It brought together engineers, scientists, developers, business, authorities and many others. Although sometimes it was a challenge to find a common language, I think our achievements show how effective this approach can be.”

The GEBCO-NF Alumni Team entered the competition in July 2016, successfully making it through to the semi-final stage and qualifying for the final round, which saw them travel to Kalamata, Greece, to compete against the other finalists in a 24-hour ocean mapping challenge. This involved producing a 5m horizontal resolution bathymetric map, as well as high-definition images of biological, archaeological, or geological features of the ocean environment, which are critical to understanding the oceans and will help inspire the next generation of educators, students, policymakers, and investors to care about ocean discovery, resource development, and protection.

The team’s SEA-KIT vessel USV Maxlimer was named after UNH Nippon Foundation-GEBCO Postgraduate Training Program alumna Maxlimer Anziani Vallee, who passed away following a car accident in January 2017. Since being used in the team’s XPRIZE entry, the vessel has completed the world’s first international commercial uncrewed transit, successfully traversing the world’s busiest shipping lane to deliver a box of oysters from the UK to Belgium on May 7, 2019.