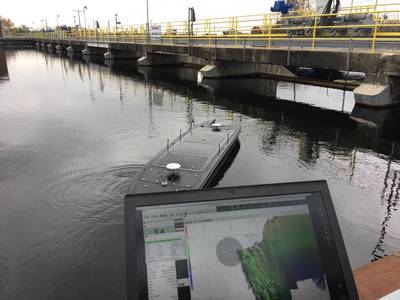 The widely reported dam failures in Central Michigan this spring highlighted the dangers of aging infrastructure. As an op-ed in The New York Times, “Dam Failures Are a Warning,” suggested, “Two dams down, a few thousand to go.” It was not meant to be a sensational statement. Deteriorating infrastructure is an issue for most countries. Many nations have systems in place to evaluate and grade the state of their national infrastructure. In the United States, the nation’s civil engineers provide an assessment of the nation’s sixteen infrastructure categories using an A-to-F school report card format.

Among these 16 categories, America’s 90,000-plus dams fared worst, attaining an overall grade of D. The condition of dams gets a great deal of attention – and it should. While a road buckling or a bridge collapsing might injure or even kill several people, a dam failing could suddenly flood entire communities, potentially causing scores or even hundreds of deaths and untold financial loss. The January 2019 failure of a Brazilian iron-ore mining company dam – the second dam failure in just over three years – flooded the town of Brumadinho causing hundreds of deaths.

Dam Inspections: A Challenging Mission and Harbinger for Additional USV Uses
Part of the challenge of managing and sustaining this part of the United States infrastructure is the fact that the average age of dams in America is almost 60 years old. Therefore, it is no surprise that the nation’s civil engineers identified over fifteen thousand dams as “high-hazard” while over eleven thousand more were listed as “significant hazard” potential.

Fifty years ago dams were built with the best engineering and construction standards of the time, not the more-stringent design criteria that are used today. But while the “want” is often there to determine the condition of a dam, the “how” is a bit more daunting. A major challenge is the lack of ability to inspect that portion of the dam that is underwater. Surveying with divers is slow, expensive and hazardous.

The danger of using humans to survey the underwater portion of dams is often not well-understood. Many dams have violent, high-speed, high-volume currents that even the strongest divers cannot cope with. Until recently, the technology needed to do a proper survey of the underwater portion of dams without putting humans at undue risk simply did not exist. Today it does, through the use of emerging technologies such as sturdy and reliable unmanned surface vehicles equipped with echo-sounders and sonars. 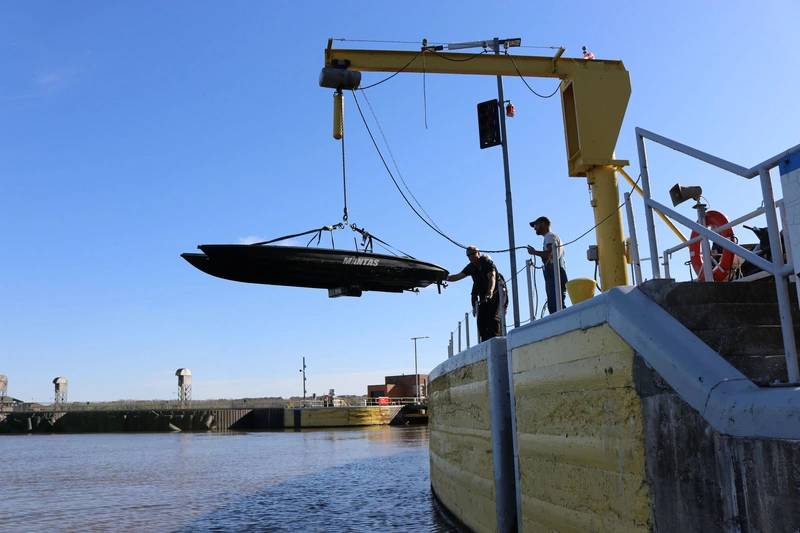 A U.S. Case Study for Dam Inspections
A recent example of how emerging technology has been employed to survey dams in the United States involved marrying an unmanned surface vehicle with a high-resolution multi-beam imaging echo-sounder sonar to conduct an underwater survey of the Keokuk Dam on the Mississippi River near Keokuk, Iowa.

The Keokuk Dam/Energy Plant presented an extreme challenge as it is considered a nine out of ten on the scale of danger and difficulty due to the high currents and eddies caused by water flowing through the dam. This made an appropriately equipped USV the ideal solution to examine the dam and provide precise underwater structural imaging.

Due to the age of the Keokuk Dam, as well as the high-risk to divers due to strong currents and eddies, the facility’s owner and operator contracted with a Florida unmanned surface vehicle manufacturer, Maritime Tactical Systems (MARTAC) Inc., to conduct a comprehensive survey of the underwater portions of this dam. MARTAC produces a family of MANTAS unmanned vessels built on a catamaran hull. Ameren Missouri selected a twelve-foot MANTAS for this underwater bathymetric imaging. For this task, the MANTAS was equipped with a Teledyne Reson T20 Multi-beam Echo-sounder/Sonar. 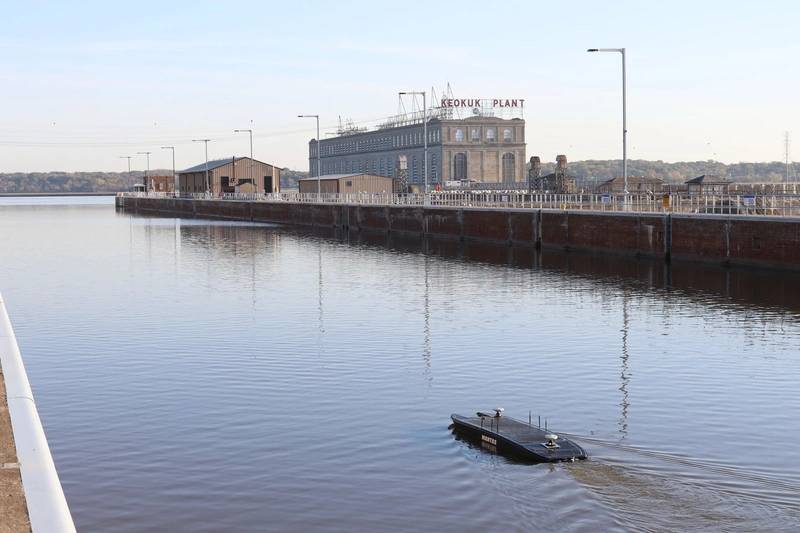 The objective of the Keokuk Dam hydrographic survey was to map and inspect underwater structures with an unmanned surface vehicle followed by the USV performing the survey of the upstream and downstream sections of the dam. The deliverable was a comprehensive, on-location hydrographic survey which further evolved into a complete high-resolution bathymetric map and inspection report.

The USV solution performed as expected with excellent resolution. The final survey took less than two days to complete and was performed through the joint effort of a MANTAS remote operator seated next to a hydrographer. Operating as a team, the real-time USV track and the real-time display of the received echo-sounder imaging was coupled to achieve the best dam and bottom images possible.

Based on the results of the Keokuk Dam hydrographic survey, additional proof of concepts were requested and demonstrated. As a result, other dam imaging has been performed and more are scheduled. With over twenty-six thousand dams in the United States deemed structurally unsound, the market for such surveys that don’t put people at risk is virtually unlimited.

Additional Missions for Unmanned Surface Vessels
One of the lessons learned from the Keokuk Dam survey effort was the ease of which the MANTAS USV was able to, “perform the survey of the upstream and downstream sections of the dam.” This built upon earlier work where the same vehicle was employed in a Navy-Marine Corps exercise to perform reconnaissance along the Intracoastal Waterway near Camp Lejeune, North Carolina.

As widely reported in the news media earlier this year, the U.S. Border Patrol is increasingly challenged to effectively perform its mission. One article, “Border Patrol Asks Industry for Sensors and Enabling Technologies to Watch Difficult-to-Monitor Waterways,” put an exclamation point on the challenge of patrolling the substantial waterway portion of the almost 2,000 mile U.S.-Mexico border. It noted that the Border Patrol has said, “Solutions should be affordable; quick to deploy; offer unattended operations; and detect, identify, track, and alert on vessels of interest autonomously.”

Based on the success of using USVs for the missions described above, it strikes me that using these unmanned surface vehicles to patrol our borders in this fashion relieves our human agents of the “dull, dirty and dangerous” work that not only puts them in harm’s way, but that has proven to be less-than-effective. Using unmanned surface vehicles like MANTAS that have been wrung out in military exercises, experiments and demonstrations is one way to achieve a low-cost solution to these missions. 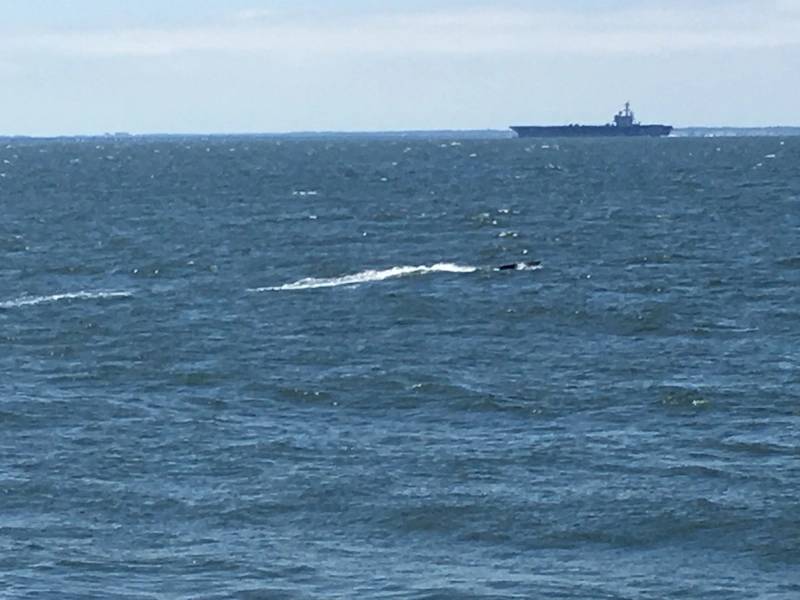