According to the CDC, 3,960 fatal unintentional drownings, including boating-related drownings, occurred in 2020. To locate the missing persons and provide closure to families, it takes dive teams time to assemble, gather their equipment, and begin searching sometimes vast bodies of water. Searching via divers is not only a long process, but it adds a considerable level of risk to an already dangerous assignment. One way to avoid that elevated risk is to use modern technology to help aid in the search.

Side Scan Sonar technology allows a search and recovery team to scan local waterways quickly and produce a detailed image of the bottom, regardless of water clarity. JW Fishers produces both a single frequency and dual frequency side scan as well as an affordable, and highly advanced, Compressed High-Intensity Radiated Pulse (CHIRP) system coming in Q1 of 2022.

In 2020, Berkshire County purchased a JW Fishers Side Scan Sonar system. In May 2021 the Berkshire County Sheriff’s Office was called  to assist local and state authorities in searching for a man thought to have gone missing in Pontoosuc Lake in Pittsfield, Massachusetts. The search began a day after police received reports of a suspicious vehicle in the parking area of Blue Anchor Park. Items located in the missing man’s vehicle prompted police to launch the search. Investigators believed it was unlikely that the missing person left the area by any other means and launched a search of the lake with the Berkshire County Sheriff’s Office, Massachusetts Environmental Police, and Massachusetts State Police.

The 1st day of searching lasted more than seven hours before it was determined that more resources needed if the search was to be successful.
Asked whether the man’s disappearance was thought to be suspicious, authorities stated that “I wouldn’t say it’s suspicious, but it’s cause for concern.” There was no evidence that proved anyone else was involved with the disappearance.. Local law enforcement was cited saying “We don’t know if we are looking for a body, but based on the items we found in the car, we felt we had to eliminate the possibility that the subject had gone into the lake.” In the end, the Pittsfield Police, Pittsfield Fire, Massachusetts State Police, Massachusetts Environmental Police, and the Berkshire County Sheriff’s Office found the missing New York man’s body. JW Fishers is proud to have contributed to the recovery operation and for the closure brought to those affected by the loss.

Lt. Thomas Grady said “the side scan has been a great tool; it has allowed us to do our searches and only put our divers in the water if we see something that we want checked out. It certainly allows us to cover much wider search areas in substantially less time and reduces risk to our divers by only having them in the water when we have a specific area/target to confirm. The side scan has been a valuable additional resource for our team.” 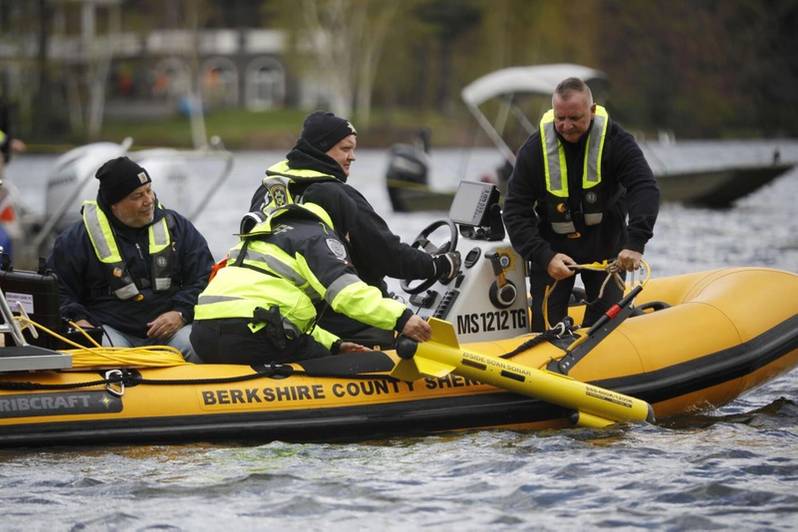